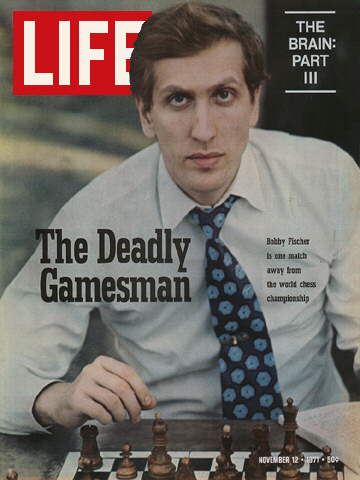 The young BOBBY FISCHER (1943-2008), say up to his 1972 defeat of Spassky, was the apotheosis of a peculiar strain of an idealized American self: the iconoclastic, autodidactic genius. For an introverted, analytically minded kid growing up in the 1970s and ’80s in suburban Denver — NORAD an hour south on the highway, Rocky Flats building nuclear weapons just outside of town — the Cold War fable of the self-made chess prodigy trouncing the champion of the Soviet chess juggernaut was like Rocky (or maybe Rocky IV). The combination of mental faculties required to be successful at this formally closed, but near-infinitely complex logical quagmire has often been taken to be indicative of generalized intelligence; that is, great chess players must be brilliant thinkers. However, the recalcitrant behaviors of young Bobby turned out to be not amusing middle-fingers to the System, but instead pathological first steps leading to the ravings of the pro-9/11, paranoid, self-abnegating, anti-Semitic hermit that he became. Still, despite the fruitlessness of his career as a social critic or moral guide, even in his craziest last days he had something to offer chess. Complaining that rote memorization of openings has trumped artistry, Fischer proposed “random chess” — in which the pieces on the back row would be shuffled before each game, forcing the players to see the board and its possibilities anew.