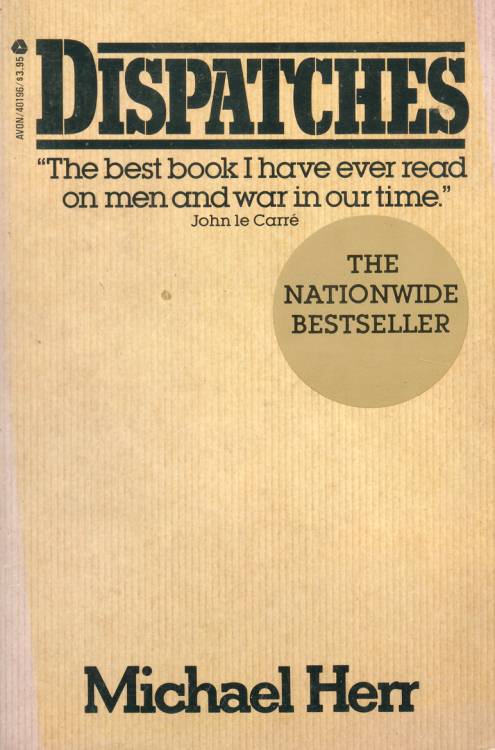 A decade after he went to Vietnam as a war correspondent for Esquire in 1967, MICHAEL HERR (born 1940) published a book called Dispatches. His reporter’s journey to the end of the night is one of the great wartime chronicles and works of contemporary nonfiction. Suffused with exhaustion and dread, Herr’s prose is electric and disquieting, bristling with scintillating observation and insight. Herr discerned the elemental music within “in-country” lingo and rock songs. He divined messages from helmet and flak jacket inscriptions. His image of a helmet with “‘Born to Kill’ placed in all innocence next to the peace symbol” found its way into Full Metal Jacket, a film he co-wrote. (For more about his time with the film’s enigmatic director, consult Herr’s Kubrick.) If Dispatches sounds in places like Martin Sheen’s Captain Willard venturing downriver in Apocalypse Now, that’s because Herr also contributed to that film’s voiceover. In Herr’s book, Khe Sanh becomes like a jar in a Wallace Stevens poem, a Mothers of Invention song communicates more about newsgathering than any debrief. At times he writes like a combat ethnographer, as when he analyzes uniform fetishes and declares the grunts “wiggier than cargo cultists.” Elsewhere, Herr comes on like a countercultural Thucydides, weighing how the story of the war is told.

Conventional journalism could no more reveal this war than conventional firepower could win it, all it could do was take the most profound event of the American decade and turn it into a communications pudding, taking its most obvious, undeniable history and making it a secret history.

Dispatches is an incomparable testament to the psychic toll of bearing witness to war. Just as the specter of Vietnam haunted Herr’s dreams long after he was “back in the World,” Dispatches continues to haunt ours.

On his or her birthday, HiLobrow irregularly pays tribute to one of our high-, low-, no-, or hilobrow heroes. Also born this date: Roy Loney, Jacques Lacan, Samuel Beckett, Garry Kasparov.