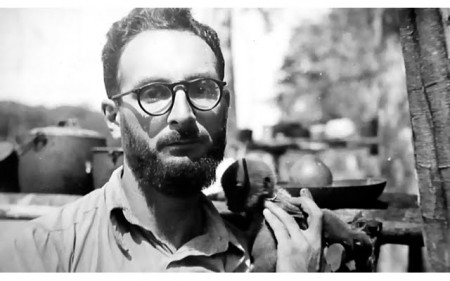 CLAUDE LÉVI-STRAUSS (1908–2009) trained in law and philosophy, then traveled to Brazil to teach sociology; while there, he ventured out (for a couple weeks at a time) to study some of the “natives” in the countryside whom he describes most memorably in his 1955 memoir Tristes Tropiques. As great as has been his influence, and as massive as is his data (see, for example, The Elementary Structures of Kinship or Mythologiques vols. 1–4), for many anthropologists Lévi-Strauss’s insufficiencies as an ethnographer — especially when his goal, to elevate “primitives” to the status of “moderns,” had the byproduct of smoothing out differences — permeate his writings. Lévi-Strauss’s genius was in constructing a theory of an elaborate cybernetic architecture of mythopoetics and social taxonomy that was universal across cultures; variety occurred not in the structural arrangements, but in the content. Whatever a people had to hand, they would plug it into the myth-making apparatus. Out of this idea came elaborate algebraic formulae representing the organization of mythological symbols, kinship systems and their circumvention of the incest taboo. By a simple manipulation, Lévi-Strauss could prove that matrilateral cross-cousin marriage in New Guinea is structurally identical to me marrying my college girlfriend. In retrospect, Lévi-Strauss may have had a touch of the con-man about him. But only if you sell the bluff hard are you likely to win the pot.

Arguments about cognitive capabilities and their relationship to race continue to be contested, but such paternalistic notions about non-white peoples were pervasive, even among academics, in the 1950s. What is most admirable about Lévi-Strauss is the following core principle, evident throughout his work: Individuals the world over are essentially equivalent in their intellectual possibility.

On his or her birthday, HiLobrow irregularly pays tribute to one of our high-, low-, no-, or hilobrow heroes. Also born this date: Jim Nutt, Stefan Zweig, Dawn Powell.