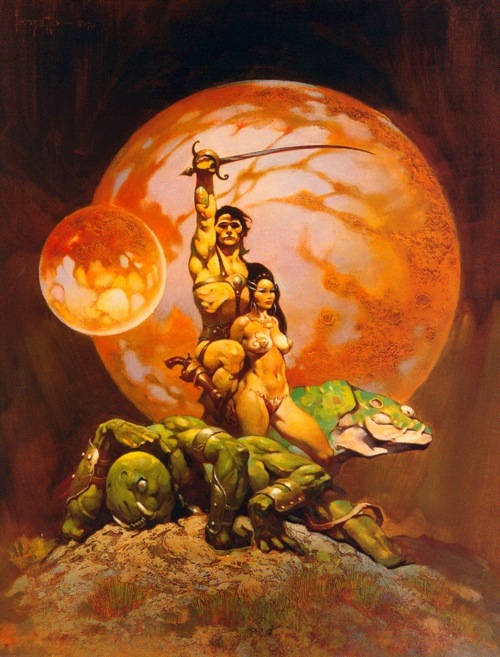 While it’s hard to separate the fantasy illustration contributions of FRANK FRAZETTA (1928-2010) from pulp fiction, a more accurate estimate of his influence would have to extend to film, video games, and music. He’s the reason Metallica, Conan the Barbarian, and Zelda can comfortably hold hands. Innumerable passionate supporters lovingly describe Frazetta as a painter of male adolescent fantasy; many acknowledge problematic rape undercurrents as well as overt racism and sexism… these are generally excused as byproducts of an over-the-top artistic masculinity commensurate with the subject matter. An illustrator who bragged about the speed with which he painted, obviously conversant with Caravaggio and Rembrandt, Frazetta swirled oil into atmospheres and dungeons, landscapes and battle axes, planets and brimstone. But you barely glance at those, because of the bodies, those unbelievable figures attacking you from the cover of that magazine; foreshortening, like everything else in his images, was aggressive. Curvy, writhing skin-coated volumes of muscle, moving through a line, simultaneously in the middle of one action and perfectly coiled for another, hips thrown into the most impossible angles, and somehow Frazetta comes through as an observer who was really paying attention. He painted meat, yes, but flesh that fights for its space, movement and compositional urgency privileged over pose… these bodies aren’t made to seduce with the barely human perfection of backlit Olympia competition forms grafted onto fantasia. Close study of the work will reveal an occasional head that’s too large, and with repeated viewings women’s buttocks and thighs might start to remind you of a balloon animal’s, but upon comparison to his contemporaries you’ll realize just how hard Frank Frazetta went for it.

On his or her birthday, HiLobrow irregularly pays tribute to one of our high-, low-, no-, or hilobrow heroes. Also born this date: Ernest Tubb, George Ade, and Alban Berg.