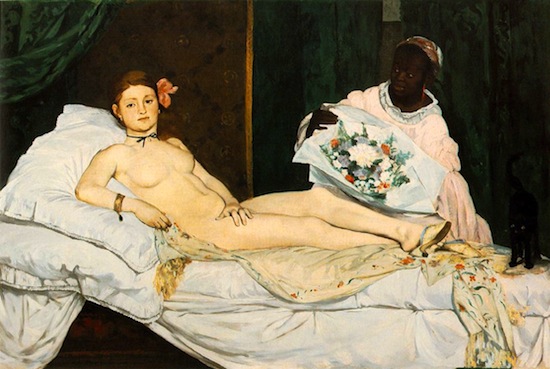 A couple weeks after Lincoln got shot trying to soak up a little culture, the French government-sanctioned Salon exhibited ÉDOUARD MANET’S (1832–83) painting Olympia, a real lady looking right at you, Mister. Reactions ranged from laughter to violence, and the subjectified prostitute’s gaze was relocated to a safer height over a doorway. Olympia formally echoes much of Manet’s work, everyday characters caught and steamrolled to cloth by polaroid flash bulbs. Or have they caught you looking? Crediting him with the invention of the “painting-object,” Foucault deeply appreciated Manet’s acknowledgement of medium and canvas, his radical re-imagining of what a painting is, and what it’s for. Never before had images been so unsettlingly self-aware in challenging the very act of looking at them.

Often credited as the godfather of the Impressionists, Manet’s akimbo sensibility finds expression in topographic pools, modular and variegated lakes that have become familiar to modern audiences through the ubiquity of Photoshop filters and vector illustration. Art historians have carried out experiments in various attempts to discover if he was being serious with us, or if he was incompetent, or if there was some other game afoot, but rationality withers against the questions Manet succeeded in asking. The next time you look at Olympia, remember, that art used to be dangerous.

On his or her birthday, HiLobrow irregularly pays tribute to one of our high-, low-, no-, or hilobrow heroes. Also born this date: Sergei Eisenstein, Django Reinhardt, Walter M. Miller, Jr..