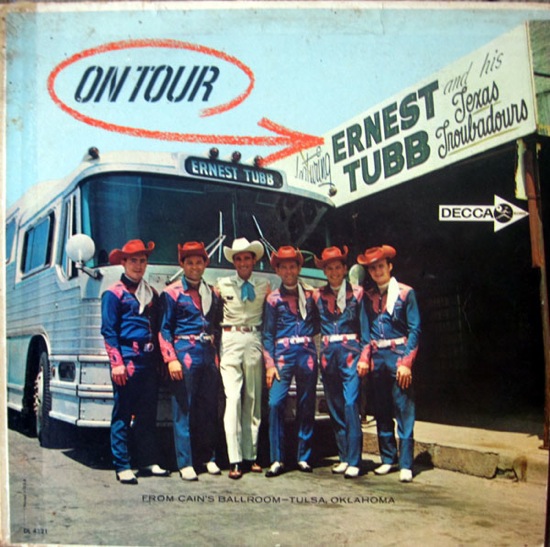 Nobody in American music did more with less than the great ERNEST TUBB (1914-84). Indeed, it was Tubb’s recognition of his limits that allowed his genius to issue forth. Born a sharecropper’s son in Crisp, Texas, Tubb was, like many young men of his era, besotted by the sly brilliance of Jimmie Rodgers, “The Singing Brakeman,” dead of tuberculosis in 1933. Three years later, bouncing between Texas radio and other, non-musical jobs, Tubb befriended Rodgers’ widow, Carrie, who gave him Jimmie’s guitar and helped Tubb get his first record date. It wasn’t successful. “Walking The Floor Over You” in 1941 was something else, however: self-discovery, the invention of honky-tonk, and a hit all-in-one. He couldn’t sing, it’s true, but Tubb couldn’t sing better than anyone, and he could write, and he had fantastic ear for musicians who, in 1946, became The Texas Troubadours. They could play anything, including in 1955, a genre-crushing version of Chuck Berry’s “Thirty Days.” A series of duets with Loretta Lynn, including 1969’s “Who’s Going To Take The Garbage” (see below), proved again Tubb’s ability to surprise without changing — as did decades of deadpan flamboyant stage wear. What is style? Perhaps Nick Tosches caught it best: “As Ernest Tubb said, beholding his lambent image in the shine of his chartreuse boots: Good taste is timeless.”

On his or her birthday, HiLobrow irregularly pays tribute to one of our high-, low-, no-, or hilobrow heroes. Also born this date: Alban Berg and George Ade.