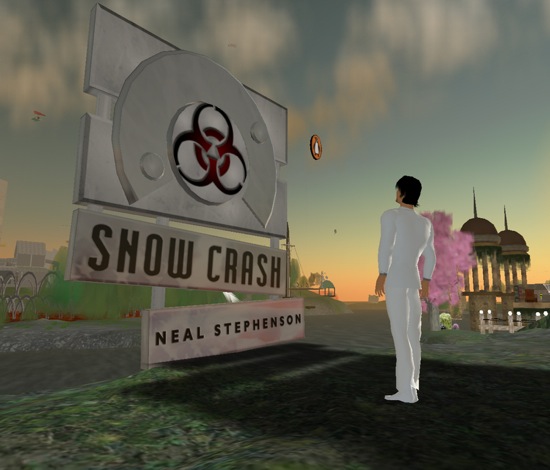 No one writes edge-of-your-seat, action-packed, cinematic cliffhangers better than NEAL STEPHENSON (born 1959), and that’s just the talking-heads parts of his novels of ideas. He mashes up solid theoretical discourse (physics, cryptography, philosophy, semiotics) with old-school “adventure tales for boys,” leavened by a comic sensibility. If Stephenson’s encyclopedic enthusiasms can be said to converge, it’s in virtual reality, which he finds everywhere: the past, the future, the interwebs, environmentalism, theater, ebooks, quantum physics, corporate espionage — and, especially, the money. Ignoring the alleged limitations of genre, his science fictions have reached out to enmesh even the books themselves: 1992’s best-selling Snow Crash became a how-to manual for the 3D web, as tech-boom era developers set to work creating Stephenson’s “Metaverse.” He’s also set fashion trends: cyberpunk (Snow Crash), steampunk (The Diamond Age), even an ambitious attempt at nanotech monastery minimalism (Anathem). Sackcloth may be a hard sell, but our smart fabric future is imminent, as makers from Hussein Chalayan to The North Face will attest. Accessories included: who dared shave after Cryptonomicon’s rehabilitation of the beard?