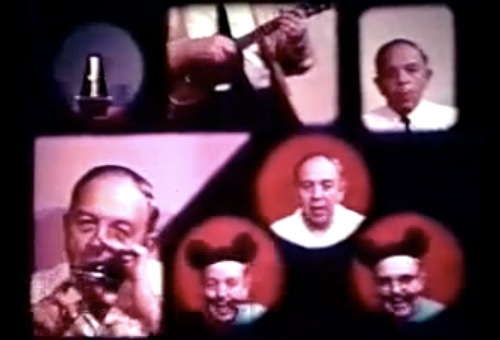 SID LAVERENTS (1908–2009) was either the most ordinary man to lead an extraordinary life or the most extraordinary man to lead an ordinary life. The list of his occupations traces the course of 20th century America: vaudevillian one-man band, Fuller Brush salesman, carpenter, sign painter, sheet-metal worker on WWII planes, aircraft engineer, inventor of myriad gadgets including an early form of cruise control and a drum pedal mechanism. Also, Laverents made 20 films — and became one of the rare amateurs to have his work entered into the National Film Registry. In Multiple SIDosis (1970; see below), he repeatedly exposes the same piece of film — of himself performing a bouncy Felix Arndt tune — so that by the end of the nine minutes, eleven different Sid heads bob up and down simultaneously on the screen, some enhanced by goofy oversized glasses or Mickey Mouse ears. All of this accomplished on equipment he designed and built in his rec room. Beyond trippy, Multiple SIDosis is like a cross between Le Chien Andalou and a home movie your uncle Marv might have made (if your uncle Marv was an engineering genius who could also play a dozen instruments). Leverents’ autobiographical film, The Sid Saga, is strange and wonderful too. Just when you think this is a movie about an old vaudevillian recounting his years hoofing, Sid starts telling you about how he watched women make cow patties in India, or how he enlisted his neighbor to be a witness when he walked in on his wife sleeping with another man, or the trials and tribulations of chinchilla husbandry. With creativity and a certain charming innocence, which is perhaps its source, Laverents met each Zelig-like turn his fortunes take with the same ingenuity he displays in Multiple SIDosis, into his 100th year.

On his or her birthday, HiLobrow irregularly pays tribute to one of our high-, low-, no-, or hilobrow heroes. Also born this date: Adam Yauch, Neil Armstrong, and Wendell Berry.