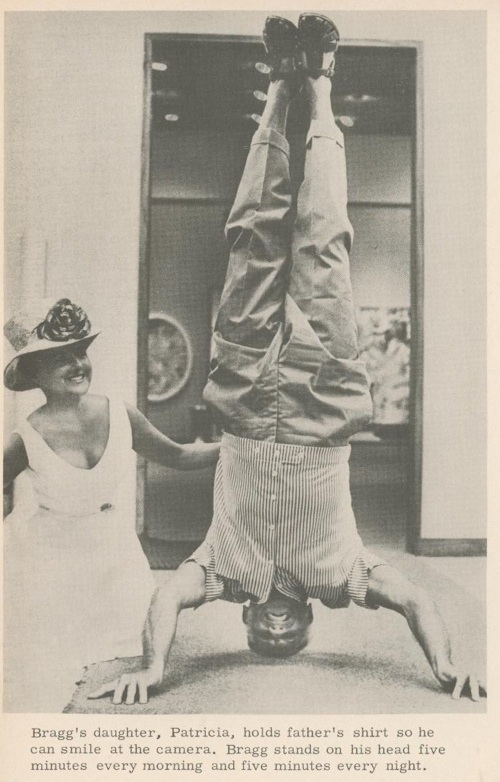 Even in the hyperbolic annals of the natural foods movement, PAUL C. BRAGG (1881/1895-1976) stands out as one of the most brazen, prevaricating rapscallions of them all. Best known for the health-food store staples Bragg’s Amino Acids and Bragg’s Organic Apple Cider Vinegar, the man behind many elixirs, life-extension pamphlets, cookbooks, and fasting and exercise programs showed a genius for shaping his own life story. Starting with his birthdate, which he pushed back to 1881 in order to give the impression he looked much younger than his years, Bragg lied his way to prominence as a lecturer and nutrition adviser to the gullible stars of early Hollywood; much of what he claimed about his own past (military service, tubercular lungs, Olympic wrestling career, his restoration of his ailing sister’s health, a Ph.D. and medical degree) was also invented. In the romance department, however, Bragg didn’t cut corners: when two women barely out of adolescence sued him for “asserted betrayal,” he attempted to dodge paying them palimony and was jailed for his trouble; later, his own son accused Bragg of running off with his 26-year-old wife, Patricia. She continued to live with her former father-in-law (though at some point she began claiming that she was his daughter), and after Bragg died — either in a surfing accident at 95 years old, or due to complications from nearly drowning at 81, depending on which account you believe — she inherited Bragg Live Foods, which she continues to run. Whether an ingenious entrepreneur, an amoral psychopath, or something else, Bragg lived up to his name.

On his or her birthday, HiLobrow irregularly pays tribute to one of our high-, low-, no-, or hilobrow heroes. Also born this date: Mary Leakey.