You poor land-bound sons of bitches, you know nothing of this planet. Stuck on the dry ground, most of you rarely glimpsing — never mind really interacting with — the ocean that makes up two thirds of the world. It’s a tragic situation to be in (don’t worry, I’m in it too, growing up in ocean-free Pennsylvania, and now living in California, but an hour’s drive away from the ocean). So, out of some combination of awe and bottomless envy, take a few minutes to think about albatrosses.

Albatrosses are sea birds; the biggest flying creatures on earth. How big? Stretch your arms straight out as wide as you can. The distance between your fingertips is a bit less than the length of just one wing of a Wandering Albatross. 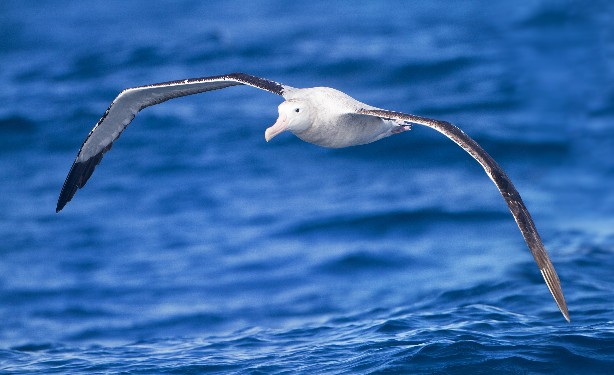 At a glance it’s obvious that albatrosses are designed to fly vast distances with great efficiency. And, boy, do they ever. Albatrosses are the most efficient travelers of all vertebrates on the planet. It’s nothing for an albatross to travel 10,000 miles in a single journey. Add up a lifetime of journeys and an albatross can travel five million miles.* And remarkably, in all that distance, they almost never flap their wings. Albatrosses use a flying technique called dynamic soaring, taking advantage of the subtle difference in wind speed and direction between the breeze near the water and the breeze several feet higher up. An albatross will angle into the wind and let the breeze lift it up higher, the way a breeze lifts a kite. Then it will turn and glide downwind, letting the tail wind and the astonishingly efficient airfoil shape of its wings carry it long distances before it repeats the process. Rapid movement (albatrosses routinely hit speeds of 50 to 90 miles per hour) along vast ocean distances, all the while doing virtually no work. Albatrosses even have a special arrangement of the bones and tendons in their wings that allows them to stay fully open with out having to use any muscular force.

It’s no surprise that an animal so beautiful and graceful is a favorite of nature documentaries, but for some reason — jealousy perhaps — albatrosses are inevitably shown at their most embarrassing, when they’re on land. (All birds, even albatrosses, must come onto land to lay and incubate their eggs). Sometimes it’s a scene showing an albatross attempting to get airborne on a calm day by frantically running along the beach … big silly webbed feet smacking against the sand, big silly ungainly wings flapping away, often while big silly music plays in the background. Or conversely, they’re shown coming in for a landing, and then either face-planting or tumbling ass over teakettle across the ground. How unfair to show creatures who spend 99+ percent of their lives in the air during those occasional few seconds when they are attempting to navigate the boundary between earth and sky. I hope that in some parallel cosmos albatrosses watch nature documentaries about humans, and laugh their asses off at how comically ungainly those humans are as they flail in the air after they’ve just fallen off a cliff. 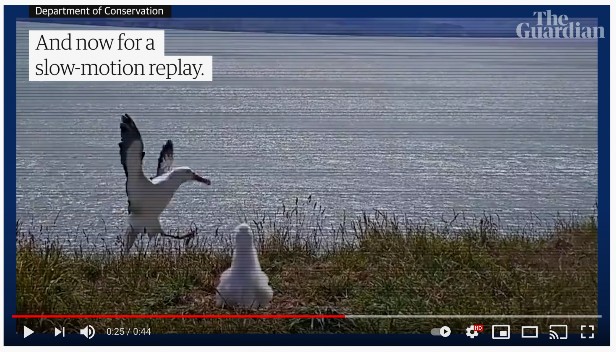 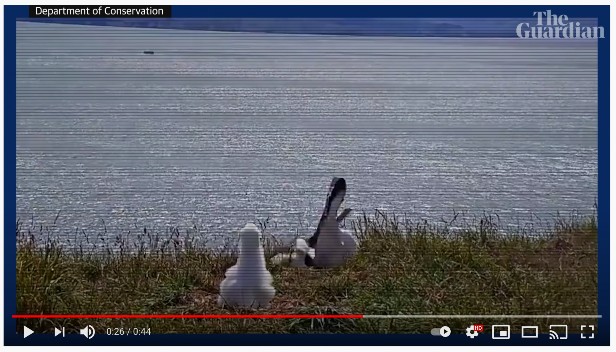 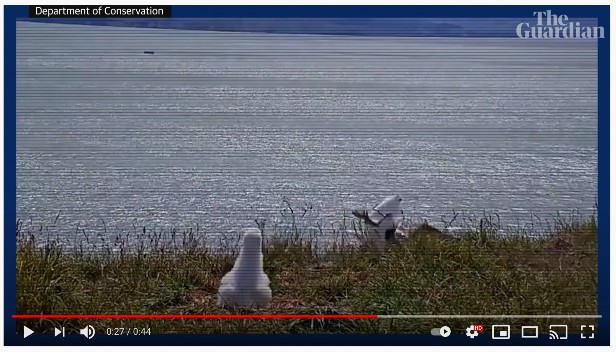 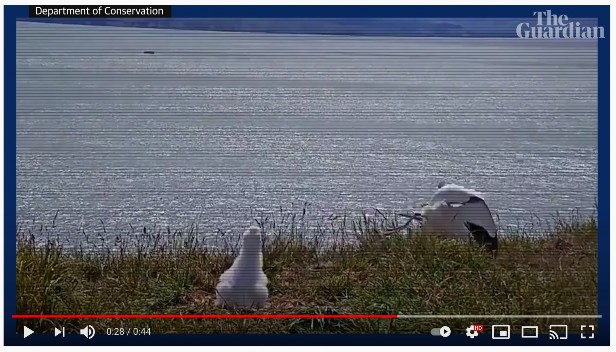 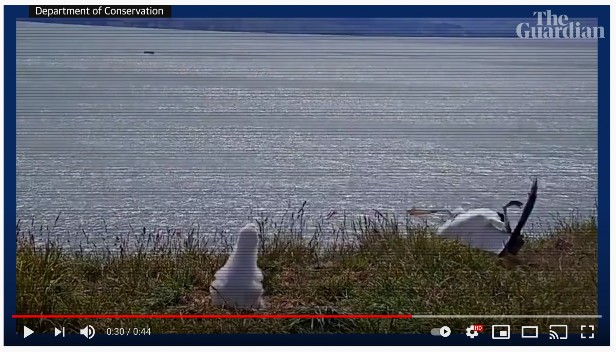 Images from a video at The Guardian showing an albatross crash landing.

Ask someone who knows nothing about birds what they know about the albatross and they’ll often reply that it’s bad luck to kill one. To find the origin of that axiom you need to go all the way back to September, 1719, off the coast of Tierra del Fuego. A privateer called the Speedwell** was struggling to round Cape Horn when an albatross began hovering and swooping around the ship. It stayed there in the sky around the ship, day in and day out, as the ship was slammed by high waves and opposing winds and got not one inch closer to making it around the Cape. The captain of the Speedwell, George Shelvocke, recalled the incident in a book he wrote about the voyage…

We all observed, that we had not the sight of one fish of any kind, since we were come to the Southward of the streights of le Mair, nor one sea-bird, except …a disconsolate black Albitross, who accompanied us for several days, hovering about us as if he had lost himself, till Hatley, (my second Captain) observing, in one of his melancholy fits, that this bird was always hovering near us, imagin’d from his colour, that it might be some ill omen. That which, I suppose, induced him the more to encourage his superstition, was the continued series of contrary tempestuous winds, which had oppress’d us ever since we had got into this sea. But be that as it would, he, after some fruitless attempts, at length, shot the Albitross, not doubting (perhaps) that we should have a fair wind after it.

More than half a century later William Wordsworth read that passage, and on a walk with his friend, Samuel Taylor Coleridge, mentioned the incident. At the time Coleridge just happened to be working on an epic poem about the sea and the spirits that punish a man for taking innocent life. He went on to make the shooting of an albatross, and the killer subsequently being forced to wear the dead albatross around his neck as a sign of penance, the central event of his epic poem The Rime of the Ancient Mariner…

This concept, that creatures were innocent and that harming them was a sin against God and nature, was wholly against the general opinion of the day. Albatrosses were routinely killed by South Sea sailors. One passenger described the taste of fresh roasted sooty albatross “like beavertail soup.”

So far, in my almost entirely land-bound life, I’ve seen albatrosses three times, each occasion requiring me to take a boat at least 20 miles out into the Pacific Ocean. And that was just to see a Black-footed Albatross (Phoebastria nigripes), which is a bit of an exception in the albatross kingdom. They’re chocolate brown instead of the typical white, not as large as some other albatross species, and one of the very few albatross species that go slumming near the California coast.

But there’s no such thing as a “lesser” albatross the first time you see one. My first glimpse was 25 miles off the coast of Monterey, on an overcast day with a fresh breeze, and rough and confused six to ten foot swells. The bird, huge with impossibly long and skinny wings, seemed to explode skyward out of the trough between two waves. Then, at the top of its climb it wheeled over and dropped down between the waves again. It repeated this for the ten minutes, gliding and swooping all around the boat, until it lost interest and glided away. All the while, it didn’t flap its wings even once. 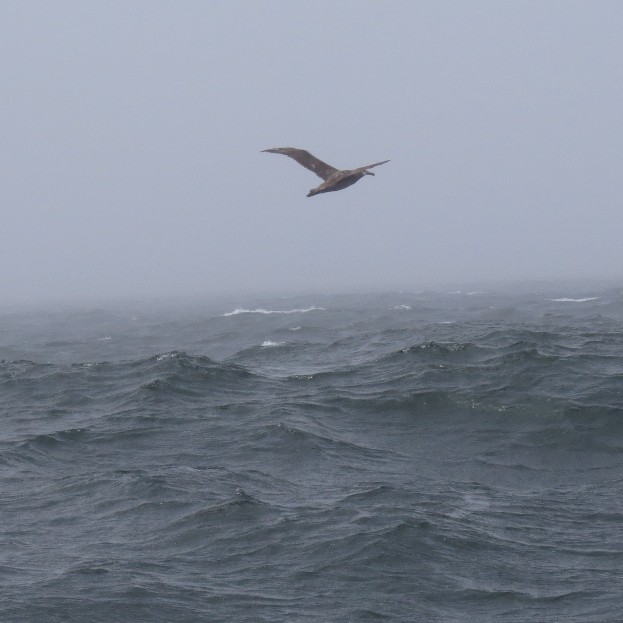 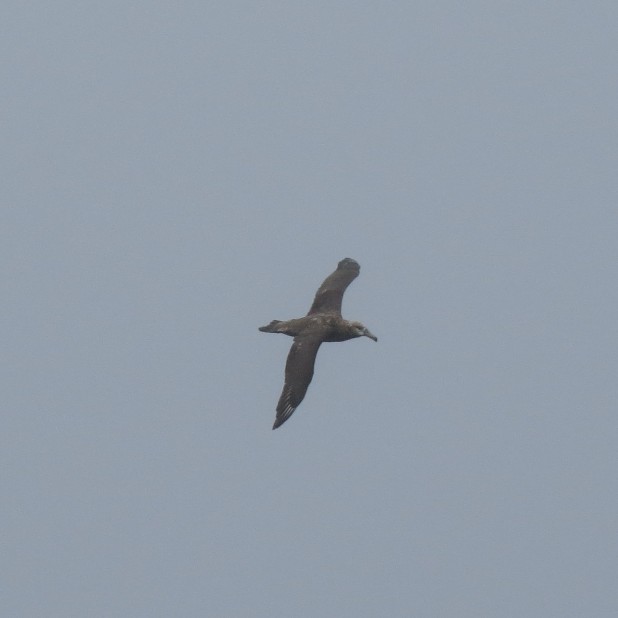 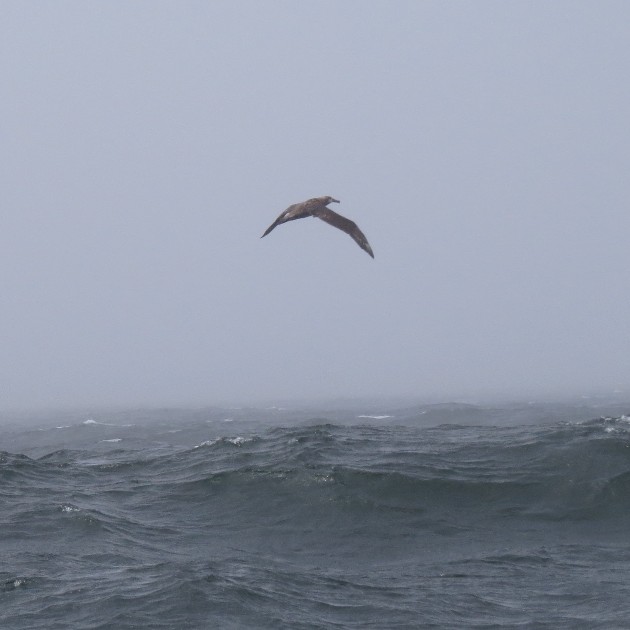 Photos I took during my first ever albatross sighting.

(*) Albatrosses have extraordinarily long life spans for birds, with many living over 50 years. The oldest known wild bird on earth is a female Laysan Albatross named Wisdom. Scientists put a leg band on Wisdom in 1956, when she was already at least five years old. That puts her age at at least 70 years old. In late 2020, Wisdom returned to her breeding grounds on Midway Island and successfully hatched and raised a chick, her 40th known child.

(**) This ship’s not to be confused with the Speedwell that the Pilgrims contracted to take them to the New World in 1620 along with their larger and more famous ship, Mayflower.