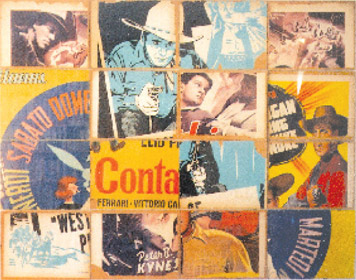 One night in 1991, just before Christmas, I was walking down St. Mark’s Place in Manhattan, heading for my tiny but charming bed-sit on Sixth Street. I’d been around the neighborhood for more than twenty years by then. I remember, for instance, when people started selling stuff on the street, circa 1980. (Earlier, when you found things, you’d either take them home or leave them for others to take; the first harbinger of Reaganomics was when people started selling what they scavenged.) Astor Place became a ’round-the-clock market, delirious and phantasmagoric. It was at once a thieves’ market, a collective yard sale, and the spillway of the collective unconscious.

That night a guy selling old movie posters caught my eye. His prices were high and the sheets were damaged — I surmised he’d fished them from a dumpster. Something made me ask him if he had any incomplete posters. He presented me with a plastic bag full of scraps for ten dollars, one sawbuck. They were rough, vivid, varied, and, because they had come apart along their creases, more or less equal in size. A light bulb appeared directly over my head.

There are pieces of four posters here. Two of them are different advertisements for a single minor horse opera, West of Pinto Pass, circa 1950, starring Crash Corrigan; another is unknown; the fourth is a three-sheet for an early (1962) picture by Elio Petri, writer-director of such 1970s radical head-scratchers as Investigation of a Citizen Above Suspicion.

During the 1950s, artists in Italy and France cut down layers of movie posters from walls and exhibited them, unaltered, as art. They called their work décollage. In that spirit I propose my untitled piece as the founding work of a new, revolutionary school: démontage.