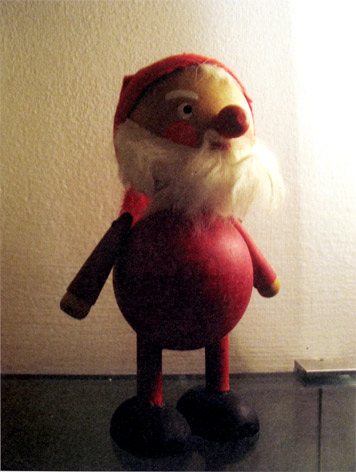 When I was seven I lived next door to an exotic old woman and she gave me this Santa. In hindsight, the woman was old and probably a cardiologist — only exotic in the sense that she was very educated and lived next door to us, the unruly Catholics with seven kids. One year she invited the bunch of us over for a little Christmas party, which seemed incredibly fancy to me. There was a long table with a white tablecloth, and cookies that were unlike any I’d ever had, flat with a sickening licorice taste.

After the party the woman gave me and my brother identical Santas, except that mine had a gimpy leg and it wobbled, which seemed right at the time because I saw myself as a victim.

See All Posts by Greg Klee

Greg Klee is Deputy Design Director of the Boston Globe.