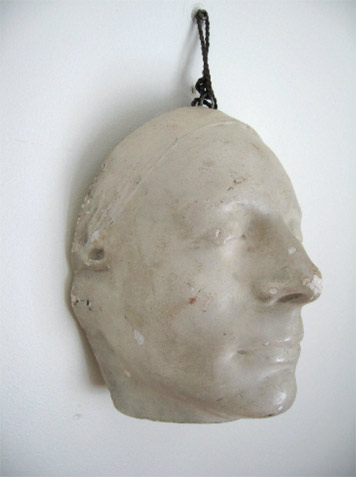 Baudelaire’s death mask gathered dust for years on top of a tall bookshelf in the front hall of my childhood home in Jamaica Plain. When I was a teenager I scaled the shelf one day after school looking for a switchblade that my father, a minister, had once mentioned having confiscated from one of his parishioners. No such luck, but I did appropriate this chipped, tarnished plaster object and hung it above my bedroom desk. It has grimaced sightlessly down upon every desk I’ve had since.

I’ve kept the death mask for a perverse reason: Because it’s the sort of thing one used to notice in the background of photographs of pretentious writers working at their desks. Under the mask’s influence I once spent two impoverishing years slaving over a book about Baudelaire and other thinkers. Like Walter Benjamin, whose Arcades Project started out in more or less the same way, I couldn’t finish it.

The poet and novelist Fanny Howe used to own my father’s house; until recently I believed it was she who’d left the mask there. But now my father tells me not only that he doesn’t know where we got it but also that he never told me whose face it was. After a little research I discovered that it’s actually a life mask of Keats, from the original in London’s National Portrait Gallery. So why did I think Baudelaire?

Perhaps I was influenced by a passage from one of Howe’s novels that I read as a teenager. The protagonist, an ex-political activist turned poet, is asked by a former comrade, “On your death bed, will you be able to say, ‘I helped the poor in their struggle for justice?’ Or will you only be able to quote Baudelaire?” It’s an unfair question, I know. But it’s one that still haunts me.