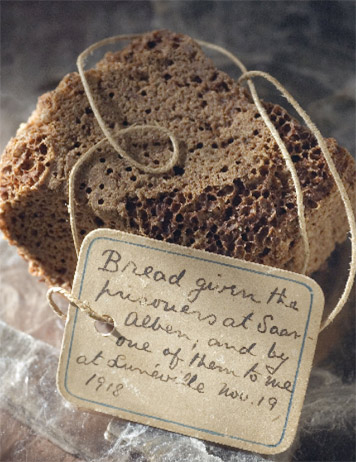 On a sunny morning in the early 1970s my neighbor, the small shrill widow of a minister and professor of theology at Harvard, dragged me into her house and opened the drawer of her late husband’s desk. Choose, choose anything, she said. From a miscellaneous collection of stuff I took this wedge of brown bread with a label: “Bread given the prisoners at Saar-Alben; and by one of them to me at Luneville Nov. 19, 1918.”

I had never held such a venerable piece of food. The label is always slipping off the diminished lump — but it is the label that evokes ideas of war, capture, suffering, and anticipated salvation either from prison or, because the bread was given to a minister, in the sight of God. Or perhaps the prisoner was simply offering up evidence of the miserable food he had endured. I have no idea why the widow selected me (almost a stranger) to have this bread, but I have kept it as a talisman of the transitory itself — a contradictory talisman, really, for bread is a daily deal, it comes and goes. And it must be fresh. But this bread is antique.

I don’t know that I have always made the right decisions in my efforts to preserve it. About ten years ago, observing its surfaces shrinking as if it were being undermined, I sealed the bread in a plastic bag with a few preservative crystals. Tiny black beetle corpses fell out of the air holes. Then a new kind of hole, like bomb craters, appeared on all sides of the bread, including the darker, smoother crust. The poison that had killed the beetles now threatened to tunnel the bread into nothing. So I sprayed it with a toxic varnish. It survives today as a symbol, though as food it is fit for neither man nor vermin.

Rosamond W. Purcelli is a leading American photographer whose strangely beautiful, often unsettling images of objects from the natural and man-made world have earned her international acclaim. Her books include Book Nest, Illuminations, A Glorious Enterprise: The Museum of Natural Sciences of Philadelphia, and Owls Head: On the Nature of Lost Things.