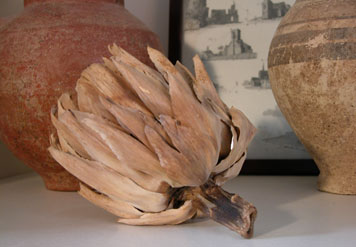 An artichoke sat on our kitchen windowsill for months, some years ago. At first, it was ugly and disgusting and kinda gooey — and guests would say “ick.” Then it slowly dried out, changed color, became something else altogether. I’ve now had it for ten years.

I think it’s rather beautiful. I keep trying to use it in a design project, say on the cover of a book. I have photographed it numerous times and created design prototypes featuring this artichoke. They never sell: others do not seem to appreciate the intrinsic beauty of this thing.

Over time it has become more fragile, and I worry that it will break. So it sits, carefully placed, in my bookcase next to some Roman pottery a couple of thousand years older. No one ever touches the older, more fragile pottery, of course. But many pick up my artichoke.

See All Posts by William Drenttel

William Drenttel (1953–2013) was a designer, author, publisher, social entrepreneur and foundation executive. He was president emeritus of AIGA, a fellow of NYU Institute of the Humanities, a senior faculty fellow and social enterprise fellow at Yale School of Management, and the publisher and editorial director of Design Observer, a website covering design, social innovation, urbanism and visual culture.