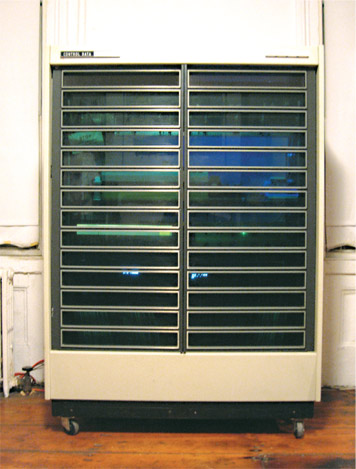 Everyone who sees this computer cabinet has the same reaction: “What the hell is that thing?” “Oh, just my stereo,” I reply. It’s about five feet tall and three and a half feet wide with Star Trek-era modern brushed aluminum and aquatinted glass doors that weigh about fifty pounds each. A metal label identifies it thusly: Control Data Corporation Peripheral Controller.

I acquired it at a surplus auction at the University of Texas in 1985. I was told the unit had cost a quarter of a million dollars; I got it for ten dollars. I dismantled it, saving all the hardware and labeling the heavy panels, and spent the next ten years hauling the pieces from place to place. Finally, in 1996, I slowly reassembled the thing. In an attempt to justify all the space it took up, I removed most of the circuit boards and modified the interior to hold my stereo and records.

I actually hate modern design — my tastes run to the Victorian and antique — and I’m not too crazy about computers, either. So why am I so fond of this uber-white elephant? I suppose it’s a souvenir of my abortive engineering career and evidence that perhaps I was only interested in the historic and aesthetic aspects of technology all along — I was never going to be happy writing software or solving differential equations. It also reminds me of visiting my dad’s office as a kid, where there were rooms full of similar IBM computers, and my sister and I would spend hours typing out insults on punch cards to amuse ourselves.

Most people have never seen anything like my big, obsolete, all-transistor pre-integrated circuit shell of a computer. Now it’s another antique, an artifact that reminds me of a time when the future seemed both exciting and foreboding.

See All Posts by John Keen

John Keen is a cartoonist and animator.