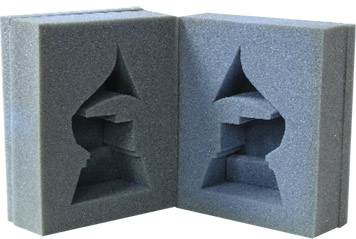 I received a Grammy award, several years ago, for a CD package I had designed. Receiving a Grammy for a package design is like winning a Nobel Peace Prize for giving up a seat on the subway to an old person.

The ceremony for the lesser awards took place before the live television broadcast. As each winner was announced, we went up onstage, accepted a statuette, and then went backstage where we handed it over to be used for another winner. Some months later, I received one with my name engraved on it. I was particularly impressed with the laser-cut foam in which it had been packaged for mailing — a perfect negative image of the object it was supposed to protect. The foam demonstrates a lot of care and is done with beautiful simplicity. I like to call it the grammyfoam.

The grammyfoam is displayed proudly on a shelf. The award itself is in a box of odds and ends.

See All Posts by Chika Azuma

Chika Azuma is an art director and graphic designer. She lives in New York with her son.