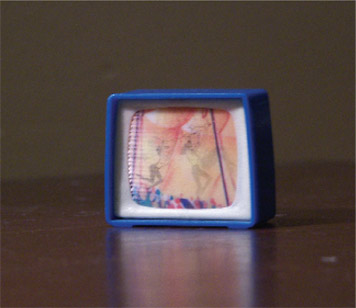 A German-made plastic pencil sharpener shaped like a TV. Its 3-D screen shows a girl trapeze artist in black tights swinging over a circus crowd. I found it in 1992 in the top drawer of my assigned desk at the American University in Cairo, where I taught English. I used it maybe twice for its stated purpose and gave up because these things never work properly, and I hate pencils.

I’d been living in Egypt just under six months and had adjusted to the noise, the traffic, the poverty, the sheer number of people, and the utter lack of privacy. I regarded this little find as a symbol of my worldliness. So attached was I to it that when a freak earthquake hit Cairo, it was one of the things I found in my hands when I made it outside.

At the time, there was an ad campaign for Tetley Tea on Egyptian television featuring overdubbed footage of Hitler giving a speech. In Arabic, Hitler said something about how England had the ships, America the planes, but “we have the tea!” So my German pencil sharpener took on another meaning: Where the hell was I? What kind of Jew was I to be living in a country where it’s as acceptable to use Hitler to sell beverages as it is for Americans to dress up as Lincoln to sell cars?

Today the pencil sharpener lives in my office, where I do not work as a teacher, or with anything remotely to do with the Middle East. It still has a piece of graphite stuck in it.

See All Posts by Beth Daniels