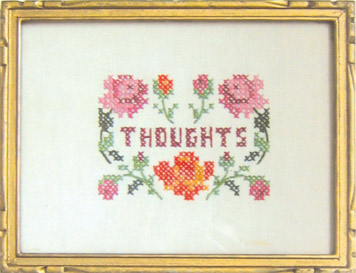 There it was: “THOUGHTS”! How could I not have seen it before? I was sitting at the dining room table in my aunt’s house in Massachusetts when I looked up and noticed this needlepoint sampler for the first time. Holy shit, I almost said out loud. Had it been there for a long time? When did my aunt make it? What was she thinking when she made it? What could it possibly mean?

I have the same inner conversation every time I look at it. Thoughts? Is it thoughts in general, or specific thoughts? Thoughts about a person? Memories? “I’m thinking of you”? Was my aunt trying to express the feeling of going through the mental process of deciding what needlepoint pattern to make next? The sampler’s vagueness plunges me into philosophical confusion. The mystery of it is what attracts me, but it’s also what bothers me. You think thoughts, but how often do you think about thoughts?

My aunt could tell how much I liked the THOUGHTS sampler and a few months after I spotted it she gave it to me as a gift. I took it home and hung it on the wall. Sometimes I would stare at it, and I’d get frustrated every time. Other people who came over and saw it reacted the same way.

My aunt never explained what she meant by THOUGHTS, and I didn’t think it was the kind of question I could ask her. Eventually I had to put the sampler away because it made my head hurt. The idea of my aunt making a picture of the word thoughts in needlepoint amazes me. I never would’ve thought of it. It’s the perfect combination: profound expression and humble craft.

See All Posts by Carol Hayes

Carol Hayes is Senior Designer in Creative Services for the City of New York, Department of Design and Construction (DDC). Check out her website Bold Extended.