LAWS OF THE UNIVERSE (1)

Mathematical estimation of the number of extraterrestrial civilizations in the Milky Way galaxy.

Enrico Fermi was one of the greatest physicists of the 20th century. He created the first nuclear reactor, helped design the atomic bomb, was the first person to create a man-made element, and won a Nobel Prize.

Fermi was the rare physicist who was both a brilliant theoretician and a highly skilled experimenter.(*) He was renowned for making accurate predictions of the results of experiments with only the scantest amount of actual data. For example, when the first atomic bomb was detonated in the New Mexico desert, Fermi witnessed the event. When the blast wave reached his position he dropped a piece of paper and observed how far it flew. Based on that, he made a surprisingly accurate estimation of the explosive force of the detonation.

These days, the term Fermi problem is used to describe any question that seems at first glance to be impossible to answer without additional information, but can be at least approximately solved through rough estimation. Here’s a typical Fermi problem…

If all of the hot dogs Americans eat in a year were laid end to end, would they reach the moon?

You could probably just Google the answer, but let’s see if we can reason it out. Here’s a typical way you could solve it: 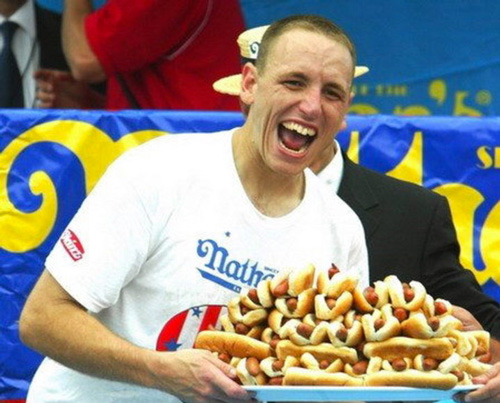 Let’s say over the course of a year the average American eats 2 or 3 hotdogs. I’ll split the difference and call it 2.5.

Now, this answer is almost certainly wrong. But it’s probably not THAT wrong. Maybe the average American eats five hot dogs a year, or 10, or just one. So my answer may be off by a a factor or two or ten, but I bet it’s not off by a factor of 100 or 1,000.

Physicists, who deal with an extraordinary range of phenomena, from the weakest and smallest sub-atomic particles to the size and mass of the total universe, often make use of Fermi problems to get a first approximation of an answer to seemingly unanswerable questions.

In 1961, astronomer Frank Drake used Fermi’s technique to try to answer one of the biggest, most important questions ever posed by mankind: are we alone in the universe?

No serious astrobiologist believes that intelligent beings from another planet have ever made it to earth, or ever will. The interstellar distances are just too vast. Our only hope of discovering life beyond our solar system is if an alien civilization transmitted some sort of communication, and we received it.

We humans have been able to send signals (first telegraph, then later radio, television, microwave, data, you name it) out into space for a bit more than a century. Drake decided to see if he could work out the likelihood of any other life forms in our galaxy being able to do that too. Here’s the equation he came up with…

Let’s break the equation down. N stands for the number of civilizations in the Milky Way galaxy with detectable electromagnetic transmissions.

R* is a measure of how often stars form that could eventually host a planet that includes intelligent communicating life.

The four parts of the equation with the letter “f” are all fractions. In order, they stand for:

To finish off the equation, ne stands for how many planets a typical star possesses, and L is how long a given civilization transmits signals into space.

From the beginning, Drake readily admitted that the equation which now bears his name is filled with variables that are (at least currently) virtually impossible to estimate. He thought the real value of the equation was as a leaping off point for more general discussions about the possibility of life elsewhere.

Nevertheless, in 1961 Drake and his colleagues did go ahead and plug some best guess numbers into the equation. Here’s what they came up with…

Using the worst case values for all of those numbers, the Drake equation says that right now in the Milky Way there are 20 alien worlds trying to communicate to us. Plug in the most optimistic values and that number explodes all the way up to 100,000,000. Quite a range. 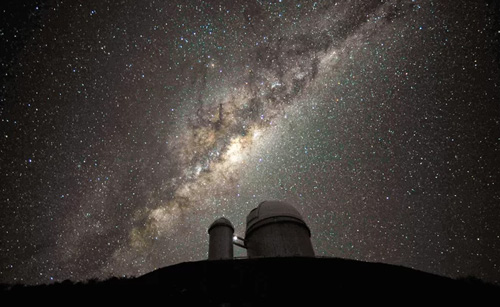 As you might expect, there have been all sorts of critiques of the Drake equation, and suggestions for ways to modify it. Some scientists speculate that typical civilizations will end up colonizing other planets in their solar system, increasing the potential sources for extraterrestrial signals. Others say that many alien planets are bombarded by radiation from their sun, making the evolution of intelligent life much less probable. It’s all so extraordinarily speculative that it’s almost certain we’ll never know if anyone else is out there.

But that doesn’t mean we shouldn’t keep listening.

In 1960 Drake was the first earthling to make a serious attempt to search for extraterrestrial life. He pointed the giant radio telescope in Green Bank, West Virginia, at two nearby stars similar to our sun. After several months of listening he reported no sign of alien signals. Drake is also co-creator of the most distant artwork ever made by humans.(****) 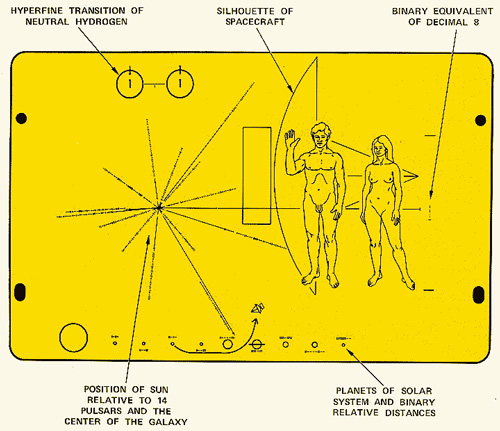 Along with astronomer Carl Sagan, Drake designed the plaque affixed to the Pioneer spacecraft. On the ridiculously tiny chance that an alien life form ever sees this object, it will hopefully convey some information about the strange creatures who created it and launched it toward the stars.

(*) On the other hand, Einstein may have been a theorist nonpareil, but I wouldn’t have trusted the guy to change a light bulb.
(**) BTW, according to the Huffington Post, the best hot dog in the world isn’t made in America; it’s made in Reykjavik, Iceland. I’m had ’em, they’re absolutely right. The best hotdogs in major league baseball are at Miller Park, home of the Milwaukee Brewers. Absolutely the worst, most gag-inducing hot dog anywhere in baseball are the ones sold by the Los Angeles Dodgers at Dodger Stadium.
(***) The earth’s magnetic field and atmosphere shield us from many of the worst effects of solar radiation.
(****) Yes, I know that the Voyager spacecraft are now further out from the Earth than the Pioneers, and that they each carry a golden record that contains images of earth, as well as audio recordings. And I know that those recordings include Chuck Berry doing Johnny B. Goode, and that there has been no greater work of art created in the history of human civilization than that. But I’m talking about art that you can immediately see with the naked eye. Or eye stalks. Or phosphor covered electro-biological capture devices. Or whatever the hell it is that those aliens are using for eyes these days.