LAWS OF THE UNIVERSE (8)

At extremely close range there can be an attractive force between molecules.

Let us now praise the humble and miraculous gecko. 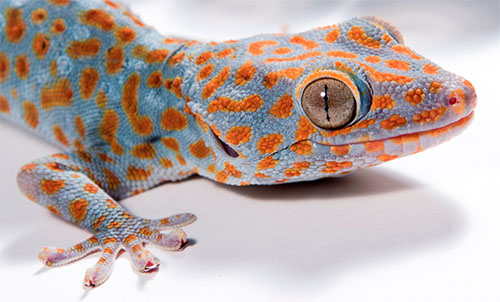 There are about 1,500 different species of these colorful little lizards on Earth, and they possess some truly remarkable properties. Their eyes can see color 300 times better than we can; we can’t even imagine how bright and colorful the world seems to a gecko. Gecko eyes also lack eyelids and instead have transparent membranes covering them, which the animals regularly lick to keep clean. They chirp like birds in order to attract mates, and when a mate can’t be found female geckos of some species can reproduce parthenogenetically; producing offspring without the need to mate with a male.

But if geckos are known for one thing(*), it’s their extraordinary ability to cling to surfaces. Geckos can scamper up and down trees, walls, even smooth sheets of glass with no difficulty. Their remarkable powers of adhesion even allow them to walk on the underside of glass ceilings. Some geckos can stick to a surface with enough strength to support 40 times their body weight. 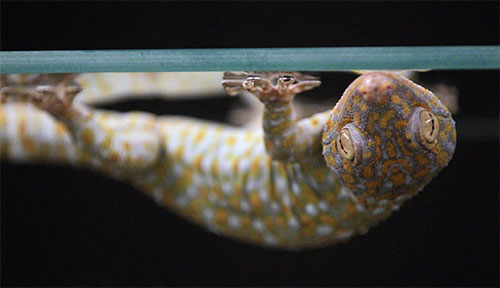 Since at least the 1800s people have realized that the commercial applications of an adhesive with that kind of power could be endless, and the search has been on to figure out just how geckos do it. This turned out to be very bad news for an awful lot of geckos.

The first thought was that gecko feet exuded some sort of sticky glue-like substance. That led to large quantities of gecko feet getting ground up in blenders, boiled in pots, and dissected under microscopes. The conclusion? Geckos don’t secrete any sort of sticky goo. Then researchers thought maybe geckos make use of some sort of suction cup structure on their toes. That theory was shot down when they stuck geckos into vacuum chambers — no fun at all for the geckos – and saw that their feet didn’t lose their adhesion.

“What about static electricity?” asked other researchers. What if gecko feet stick to surfaces the same way socks stick together when they come out of the dryer? To test that they had geckos cling to a metal plate and then they blasted the plate with X-rays in order to disrupt any possible static cling. TAKE THAT, geckos! The result? Nope, geckos aren’t using static charge either. It wasn’t until the 2000s that researchers found the geckos’ secret: a bizarre property of some molecules called Van der Waals attraction.

You may remember from high school chemistry class that atoms can bond together to form molecules. A typical molecule contains the same number of positively charged protons and negatively charged electrons, and so has no overall electrical charge. So far so good. But some molecules — even though overall they are electrically neutral — can have regions that have a bit of localized positive or negative charge. When that happens, the positively charged region of one molecule and the negatively charged region of a neighboring molecule can begin to attract each other. This exact thing happens with water molecules: 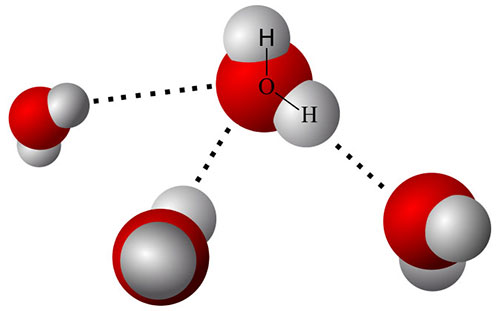 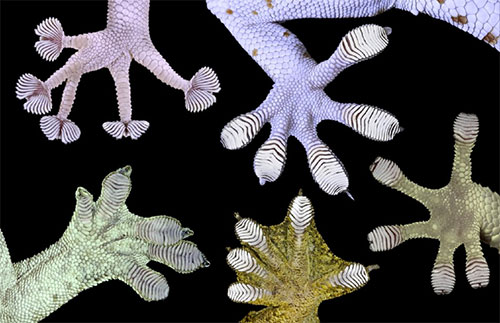 Those ridges look solid, but they are actually composed of a huge number of tiny, densely packed hairs called setae; more than a quarter million of them in a single gecko toe. Zoom in on an individual setae hair and you’ll discover that it splits into hundreds of even tinier hairs called spatulae, each of them ending in a flat triangular tip: 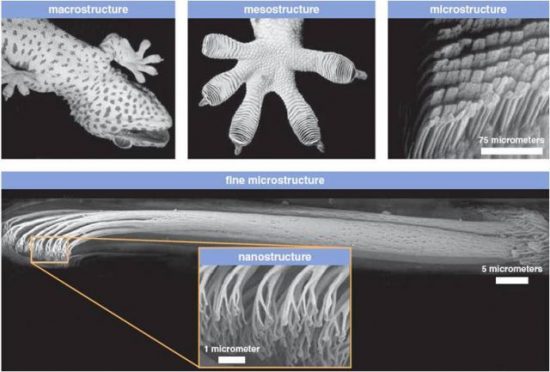 When the gecko presses a foot against a surface it places an enormous area of spatulae molecules in contact with the molecules of the surface material. Those gecko and surface molecules have… you guessed it… Van der Waals attraction to each other, and the sum total of all that molecular attraction is enough to keep the gecko attached.

Van der Waals force was discovered in 1873 by Dutch physicist Johannes Diderik van der Waals(*). He was born in 1837, the first of ten children. Van der Waals was originally barred from attending university in the Netherlands because he had no formal education in classical languages, but was granted a dispensation by the minister of education. He attended Leiden University and later became the first physics professor at Amsterdam University.

In addition to his work on intermolecular forces, Van der Waals did groundbreaking work on state changes in matter – such as when liquid water turns to steam – and on the determination of the actual size of molecules. He was awarded the Nobel Prize for Physics in 1910. He died in 1923 at age 84, but chemistry seems to still run in his family. His grandson, Chris Vanderwal, is a professor of chemistry at the University of California at Irvine.

(*) Besides being spokesreptiles for insurance companies.
(**) The correct pronunciation of the last word of Van der Waals name is with a “V” sound, not “W”. It sounds like “valls”, not “walls”.