The altitude at which air travel ends and space travel begins.

As you all learned back in school, airplanes fly because air moving over the plane’s wings generates lift.(1) Generate enough lift to overcome the weight of the aircraft and — voila — you’re airborne. Here’s the equation that governs the lift generated by an airplane wing (don’t panic, we’re not going to get all mathy)…

In this equation “L” is the amount of lift, “p” is the density of the air, “v” is velocity of the wing, “S” is the surface area of the wing, and “CL” is a measure of how good this particular wing is at generating lift. For purposes of this discussion, all we care about are “p” and “v”. Let’s look at velocity (“v”) first.

From the equation you can see that as velocity increases, so does lift. That makes intuitive sense — an airplane sitting there on the ground with a breeze gently wafting over its wings doesn’t just lift up into the sky. The wind needs to be moving really rapidly over the wings, the way it does when a plane move faster and faster down a runway at takeoff. Eventually air is flowing over the wings so rapidly (often between 150 and 250 miles for hour for a large passenger jet) that the wings finally generate enough lift to raise the airplane up into the sky. 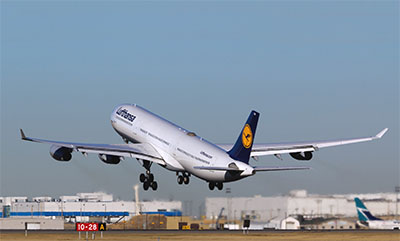 On the other hand, the relationship between air pressure (“p”) and lift can seem a little backwards. You might think that having denser air (which is another way of saying the air pressure is greater) would make it harder for an airplane to become airborne, but it turns out that the more dense the air, the greater the lift.(2) For instance on a very hot day, when the air has expanded and is less dense, a plane may have to go a good 5% or 10% faster to lift off than it would on a freezing cold day.

Air also becomes less dense as you go higher and higher into the sky. At 30,000 feet (a typical altitude for a commercial jet) the air is only about 40% as dense as it is on the ground. A jet at that altitude has to go about 50% faster to generate the same lift it would have near the ground.

At 70,000 feet (the cruising altitude of a U-2 spy plane) the air is only about 6% as dense as it is at ground level, and a typical jet airliner would need to fly four times faster than normal, way faster than they are designed to go. (U-2 spy planes, with their absolutely enormous wings, are specially designed for operation at that extremely high altitude.)

Keep going higher and higher in the atmosphere and the air density keeps getting less and less. At 100,000 feet (about 19 miles, the altitude of a high altitude weather balloon) the air density is only about 1% of what it is at the ground. At 200,000 feet (about 38 miles) it’s down to about 1/100 of 1% of ground density. A plane at those altitudes would have to move ridiculously fast to generate lift.

But take this concept even further, and imagine a plane trying to fly at even greater altitude. At about 330,000 feet (about 100 kilometers, or 62 miles) you’ll reach an altitude where, if a plane went fast enough to generate adequate lift, it would also exceed orbital velocity. It would for all intents and purposes no longer be an airplane, it would now be an orbiting satellite or space station.

That line — where air travel ends and space travel begins — is known as the Kármán line.

The line is named after Theodore von Kármán (1881–1963), the Hungarian-American engineer and physicist who first made the calculations that determined the elevation above which aeronautical flight is no longer possible.

Kármán was responsible for many groundbreaking advances in supersonic flight, first in Hungary and — after he fled Europe in fear of the Nazis — in America. Kármán was one of the original founders of the Jet Propulsion Laboratory. Toward the end of his life President Kennedy awarded Kármán the first National Medal of Science.

The Kármán line isn’t precisely 100 kilometers — it fluctuates with atmospheric pressure, aircraft design, solar flux, and a whole bunch of other things. But 100 kilometers is a nice round number, so that altitude has been adopted as the unofficial boundary of space. For instance the FAI, the international body that certifies aeronautic records, says that if you’ve been above the 100 kilometer line you can legitimately call yourself an astronaut.

(1) By the way, I almost certainly guarantee that however you think airplane wings generate lift, you’re wrong. The explanations we all learned in grade school, high school, and even college at best tell only a tiny part of what’s happening when an airplane lifts off. To learn what’s really going on, I recommend the “A more comprehensive physical explanation” section of the wikipedia page on lift.
(2) Denser air *does* make it more difficult for a plane to more forward through the air, due to increased air resistance, but we’re ignoring that for this discussion.