LAWS OF THE UNIVERSE (3)

The bands of color that appear when light waves reflect from two closely adjacent surfaces.

If he had been born a century or two later, after automobiles were common, I wonder if he would have had an additional line in there about being able to see a rainbow in a puddle… 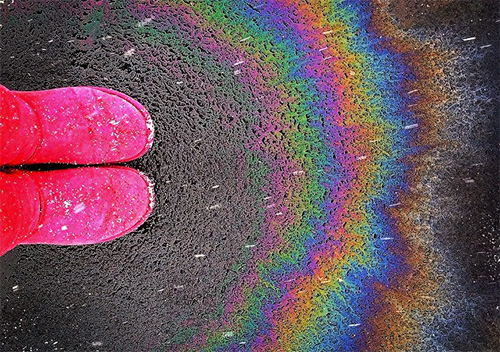 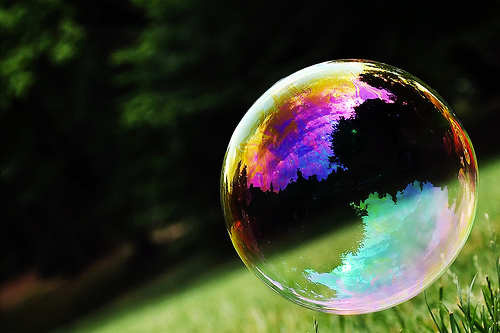 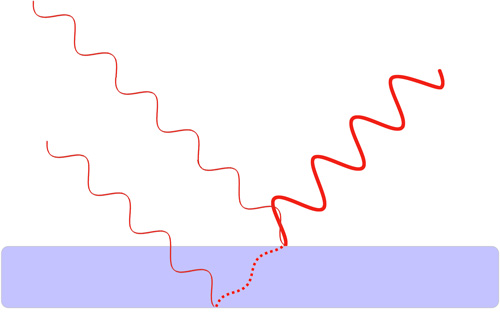 This soap bubble is just the right thickness so that when the two light beams recombine after reflection they’re in perfect sync with each other, and red light will strongly reflect back. But now let’s consider green light hitting the exact same spot of the soap bubble… 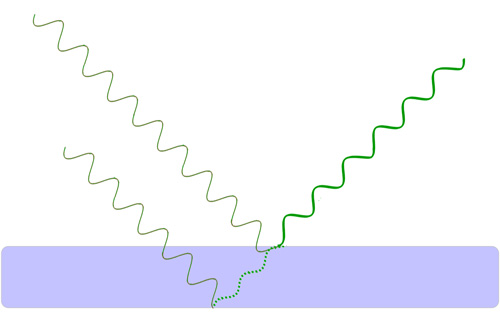 Green light has a different wavelength than red, and in this example the recombined light waves are out of sync with each other, and cancel each other out. As a result, very little green light is reflected back.

The most minute variations in thickness of the oil or soap determine which colors reflect back and which colors get absorbed. A variation of a few nanometers can be the difference between seeing a patch of red or a patch of blue.(***) 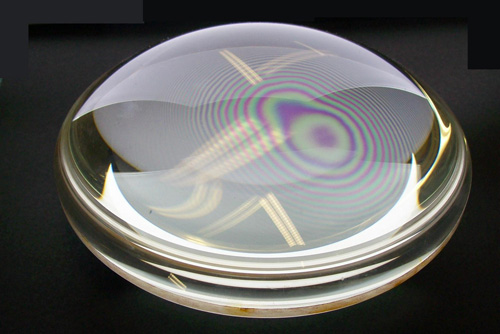 This arrangement generates a pattern of colored circles known as Newton’s rings, named for Sir Isaac Newton, who first investigated the effect in 1717.(****)

Since the most minute differences in shape and distance can cause changes in these light patterns, Newton’s rings are used in many industries and fields of science to take ultra-precise measurements.

The mechanism behind Newton’s rings shows up in other places as well. It’s what causes steel to change color when it’s heated. In this case light is bouncing off of the top and bottom surfaces of a very thin layer of iron oxide. 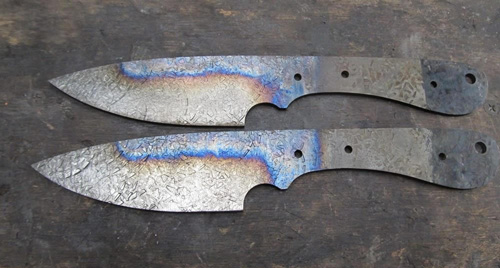 The thickness of that iron oxide layer varies depending on how the metal is heated and cooled. Metalworkers for hundreds, if not thousands, of years have used those color variations as a reliable indicator of the degree of tempering of the metal. It also causes the iridescent colors in the feathers of birds, such as the European Starling. 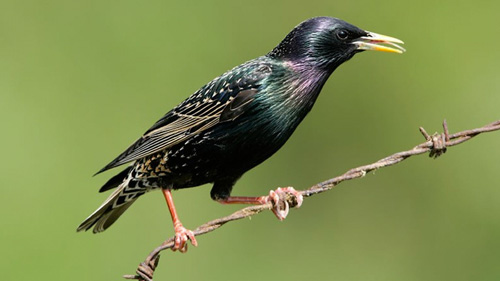 Isaac Newton (1642-1726) was one of the most brilliant people who ever lived. Every one of these Laws of the Universe essays highlights someone of extraordinary intellect and insight. But Newton, well, he’s just on a whole other level. He discovered the universal laws of motion, he discovered the law of gravity, he invented calculus, and he laid out the principles of modern optics and color. That’s just the top of his resume; most people don’t know that he also invented the reflecting telescope, formulated the first empirical law of heating and cooling, made the first calculation of the speed of sound, improved the mathematics of binomial coefficients, was president of the Royal Society, and ran the Royal Mint for more than 30 years. 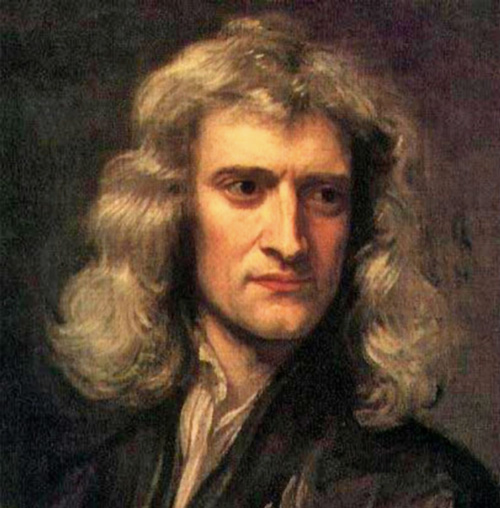 By all accounts Newton had an unhappy childhood. His father died before he was born. When he was three his mother remarried and palmed young Isaac off on his grandmother. He grew up in sight of his mother’s house without being allowed to be part of it.

He was brilliant even a a child, and at the age of 19 was admitted to Trinity College at the University of Cambridge. He would eventually be named the Lucasian Professor of Mathematics at Cambridge, one of the most prestigious positions in the math world. Later holders of the post would include Charles Babbage and Stephen Hawking.

In spite of — perhaps because of — his extraordinary genius, Newton was genuinely weird. He was chronically absent-minded and easily distracted. He spent his later years in such pursuits as trying to turn base metals into gold (*****), and studying the floor-plan of King Solomon’s temple in Jerusalem (in the belief that its geometry held clues to the date of the second coming of Christ). He was also, possibly, a secret member of a religious group that disputed the Christian doctrine of the holy trinity. (Given that he was on the faculty of a place called Trinity College, it’s not surprising that he would have kept that on the down low.) The general consensus is that he died a virgin.

The story about Isaac Newton I’m most fond of is from his time at Cambridge. As the story goes, when Newton was walking between buildings on campus he would sometimes pause, scratch some esoteric diagram or equation into the dirt with his cane, ponder it for a while, and then walk on. Students and faculty who would come across these markings would take care to walk around them, in case Professor Newton needed to refer to them later. The drawings would remain undisturbed until the next rain washed them away. If I had been a student there, I would have guarded those scratchings with my life.

(*) Auguries of Innocence
(**) An additional portion of the light doesn’t reflect off of either surface, it just passes through. That portion has no effect on this phenomenon.
(***) A typical soap bubble is between 10 and 1000 nanometers thick. In comparison, a typical human hair is about 50,000 nanometers thick.
(****) It turns out Newton was not the first scientist to write about this effect. Robert Hooke mentioned it a half century before, in his book Micrographia. But it was Newton who first explained the mechanism of the phenomenon. This is a pattern that happened repeatedly throughout Hooke and Newton’s lives… Hooke would claim some discovery because he had mentioned it first, but Newton would claim the discovery was his because he actually figured out the underlying science. If you’ve read my essay on Hooke’s Law then you already know how much Hooke and Newton hated each other. Newton’s rings probably didn’t help matters.
(*****) If Lavoisier was the first great chemist, Newton was the last great alchemist.