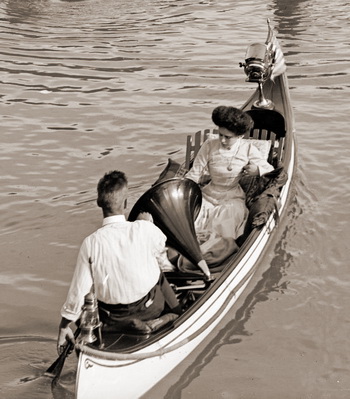 There was a cold expression in Eve’s eyes as she made her way slowly to the boathouse. The information which she had just received had come as a shock, and she was trying to adjust her mind to it. When Miss Clarkson had told her of the unhappy conclusion to her old school friend’s marriage to Ralston McTodd she had immediately, without knowing anything of the facts, arrayed herself loyally on Cynthia’s side and condemned the unknown McTodd uncompromisingly and without hesitation. It was many years since she had seen Cynthia, and their friendship might almost have been said to have lapsed; but Eve’s affection, when she had once given it, was a durable thing, capable of surviving long separation. She had loved Cynthia at school, and she could feel nothing but animosity towards anyone who had treated her badly. She eyed the glittering water of the lake from under lowered brows, and prepared to be frigid and hostile when the villain of the piece should arrive. It was only when she heard footsteps behind her and turned to perceive Psmith hurrying up, radiant in gleaming flannel, that it occurred to her for the first time that there might have been faults on both sides. She had not known Psmith long, it was true; but already his personality had made a somewhat deep impression on her, and she was loath to believe that he could be the callous scoundrel of her imagination. She decided to suspend judgment until they should be out in midwater and in a position to discuss the matter without interruption.

‘I am a little late,’ said Psmith as he came up; ‘I was detained by our young friend Freddie. He came into my room and started talking about himself at the very moment when I was tying my tie and needed every ounce of concentration for that delicate task. The recent painful episode appeared to be weighing on his mind to some extent.’ He helped Eve into the boat and started to row. ‘I consoled him as best I could by telling him that it would probably have made you think all the more highly of him. I ventured the suggestion that girls worship the strong, rough, dashing type of man. And after I had done my best to convince him that he was a strong, rough, dashing man, I came away. By now, of course, he may have had a relapse into despair; so if you happen to see a body bobbing about in the water as we row along it will probably be Freddie’s.’

‘I don’t if you don’t,’ said Psmith agreeably. ‘Very well, then, if we see a body we will ignore it.’ He rowed on a few strokes. ‘Correct me if I am wrong,’ he said, resting on his oars and leaning forward, ‘but you appear to be brooding about something. If you will give me a clew I will endeavor to assist you to grapple with any little problem which is troubling you. What is the matter?’

Eve, questioned thus directly, found it difficult to open the subject. She hesitated a moment and let the water ripple through her fingers.

‘I have only just found out your name, Mr. McTodd,’ she said at length.

‘It is always thus,’ he said. ‘Passing through this life, we meet a fellow mortal, chat a while and part; and the last thing we think of doing is to ask him in a manly and direct way what his label is. There is something oddly furtive and shamefaced in one’s attitude towards people’s names. It is as if we shrank from probing some hideous secret. We say to ourselves, ‘This pleasant stranger may be a Snooks or a Buggins. Better not inquire.’ But in my case — ’

‘Now, there,’ said Psmith, ‘I cannot follow you. I wouldn’t call McTodd a bad name, as names go. Don’t you think there is a sort of Highland strength about it? It sounds to me like something out of the Lady of the Lake or the Lay of the Last Minstrel. ‘The stag at eve had drunk its fill adoon the glen beyint the hill, and welcomed with a friendly nod old Scotland’s pride, young Laird McTodd’ — you don’t think it has a sort of wild romantic ring?’

‘I ought to tell you, Mr. McTodd,’ said Eve, ‘that I was at school with Cynthia.’

Psmith was not a young man who often found himself at a loss, but this remark gave him a bewildered feeling such as comes in dreams. It was plain to him that this delightful girl thought she had said something serious, even impressive; but for the moment it did not seem to him to make sense.

He sparred warily for time.

‘Indeed? With Cynthia? That must have been jolly.’

The harmless observation appeared to have the worst effect upon his companion. The frown came back to her face.

Psmith, having nothing to say, remained silent, and the boat drifted on. Eve’s face was delicately pink, for she was feeling extraordinarily embarrassed. There was something in the solemn gaze of the man before her which made it difficult for her to go on. But with the stout-heartedness which was one of her characteristics, she stuck to her task.

‘After all,’ she said, ‘however you may feel about her now, you must have been fond of poor Cynthia at one time, or I don’t see why you should have married her.’