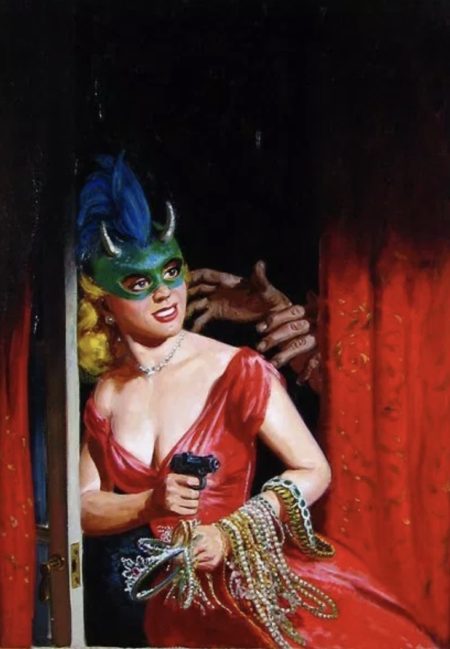 To be prepared is everything in this life. Ever since her talk with Mr. Joseph Keeble in the High Street of Market Blandings that afternoon, Eve’s mind had been flitting nimbly from one scheme to another, all designed to end in this very act of seizing the necklace in her hands, and each rendered impracticable by some annoying flaw. And now that fate in its impulsive way had achieved for her what she had begun to feel she could never accomplish for herself, she wasted no time in bewildered inaction. The miracle found her ready for it.

For an instant she debated with herself the chances of a dash through the darkened hall up the stairs to her room. But the lights might go on again, and she might meet someone. Memories of sensational novels read in the past told her that on occasions such as this people were detained and searched.

Suddenly, as she stood there, she found the way. Close beside her, lying on its side, was the flowerpot which Psmith had overturned as he came to join her on the terrace wall. It might have defects as a cache, but at the moment she could perceive none. Most flowerpots are alike, but this was a particularly easily remembered flowerpot; for in its journeyings from the potting shed to the terrace it had acquired on its side a splash of white paint. She would be able to distinguish it from its fellows when, late that night, she crept out to retrieve the spoil. And surely nobody would ever think of suspecting ——

She plunged her fingers into the soft mold and straightened herself, breathing quickly. It was not an ideal piece of work, but it would serve.

She rubbed her fingers on the turf; put the flowerpot back in the row with the others; and then, like a flying white phantom, darted across the terrace and into the house, and so, with beating heart, groping her way to the bathroom to wash her hands.

The twenty-thousand-pound flowerpot looked placidly up at the winking stars.

It was perhaps two minutes later that Mr. Cootes, sprinting lustily, rounded the corner of the house and burst onto the terrace — late as usual.

The Efficient Baxter prowled feverishly up and down the yielding carpet of the big drawing-room. His eyes gleamed behind their spectacles, his domelike brow was corrugated. Except for himself, the room was empty. As far as the scene of the disaster was concerned, the tumult and the shouting had died. It was going on vigorously in practically every other part of the house, but in the drawing-room there was stillness, if not peace.

Baxter paused, came to a decision, went to the wall and pressed the bell.

“Thomas,” he said when that footman presented himself a few moments later.

“Yes, Susan,” snapped the efficient one, who had always a short way with the domestic staff. “Susan, Susan, Susan! The new parlor maid.”

Thomas withdrew, outwardly all grave respectfulness, inwardly piqued, as was his wont, at the airy manner in which the secretary flung his orders about at the castle. The domestic staff at Blandings lived in a perpetual state of smoldering discontent under Baxter’s rule.

“Susan,” said Thomas when he arrived in the lower regions, “you’re to go up to the drawing-room. Nosey Parker wants you.”

The pleasant-faced young woman whom he addressed laid down her knitting. “Who?” she asked.

“Mister Blooming Baxter. When you’ve been here a little longer you’ll know that he’s the feller that owns the place. How he got it I don’t know. Found it,” said Thomas satirically, “in his Christmas stocking, I expect. Anyhow, you’re to go up.”

Thomas’ fellow footman, Stokes, a serious-looking man with a bald forehead, shook that forehead solemnly. “Something’s the matter,” he asserted. “You can’t tell me that wasn’t a scream we heard when them lights was out. Or,” he added weightily, for he was a man who looked at every side of a question, “a shriek. It was a shriek or scream. I said so at the time. ‘There,’ I said, ‘listen!’ I said. ‘That’s somebody screaming,’ I said. ‘Or shrieking.’ Something’s up, I’m sure.”

“Well, Baxter hasn’t been murdered, worse luck,” said Thomas. “He’s up there screaming or shrieking for Susan. ‘Send Susan to me!’ ” proceeded Thomas, giving an always popular imitation. “‘Susan, Susan, Susan!’ So you’d best go, my girl, and see what he wants.”

“And, Susan,” said Thomas, a tender note creeping into his voice, for already, brief as had been her sojourn at Blandings, he had found the new parlor maid making a deep impression on him, “if it’s a row of any kind ——”

“Or description,” continued Thomas, accepting the word; “if ’e’s ’arsh with you for some reason or other, you come right back to me and sob out your troubles on my chest, see? Lay your little ’ead on my shoulder and tell me all about it.”

The new parlor maid, primly declining to reply to this alluring invitation, started on her journey upstairs; and Thomas, with a not unmanly sigh, resumed his interrupted game of halfpenny nap with colleague Stokes.

The Efficient Baxter had gone to the open window and was gazing out into the night when Susan entered the drawing-room.

The secretary spun round. So softly had she opened the door and so noiselessly had she moved when inside the room that it was not until she spoke that he had become aware of her arrival. It was a characteristic of this girl Susan that she was always apt to be among those present some time before the latter became cognizant of the fact.

“You gave me quite a start.”

“I’m sorry. What was it,” she asked, dismissing in a positively unfeeling manner the subject of her companion’s jarred nerves, “that you wished to see me about?”

“I have. I always shut doors.”

“No, thank you, Mr. Baxter. It might look odd if anyone should come in.”

“Of course. You think of everything.”

Baxter stood for a moment, frowning.

“Miss Simmons,” he said, “when I thought it expedient to install a private detective in this house I insisted on Wragge’s sending you. We had worked together before.”

“Sixteenth of December, 1918, to January 12, 1919, when you were secretary to Mr. Horace Jevons, the American millionaire,” said Miss Simmons as promptly as if he had touched a spring. It was her hobby to remember dates with precision.

“Exactly! I insisted upon your being sent, because I knew from experience that you were reliable. At that time I looked on your presence here merely as a precautionary measure. Now, I am sorry to say ——”

“When the lights went out just now?”

“Well, why couldn’t you say so at once? Good gracious, man, you don’t have to break the thing gently to me!”

The Efficient Baxter, though he strongly objected to being addressed as “man,” decided to overlook the solecism.

“The lights suddenly went out,” he said. “There was a certain amount of laughter and confusion. Then a piercing shriek ——”

“And immediately after Lady Constance’s voice crying that her jewels had been snatched from her neck.”

“Still greater confusion, which lasted until one of the maids arrived with a candle. Eventually the lights went on again, but of the necklace there was no sign whatever.”

“Well, were you expecting the thief to wear it as a watch chain, or hang it from his teeth?”

Baxter was finding his companion’s manner more trying every minute, but he preserved his calm.

“Naturally the doors were barred and a complete search instituted, and extremely embarrassing it was. With the single exception of the scoundrel who has been palming himself off as McTodd, all those present were well-known members of society.”

“Well-known members of society might not object to getting hold of a twenty-thousand-pound necklace. But still, with the McTodd fellow there, you oughtn’t to have had far to look. What had he to say about it?”

“He was among the first to empty his pockets.”

“Well, then, he must have hidden the thing somewhere.”

“Not in this room. I have searched assiduously.”

There was a silence.

“It is nothing of the kind,” replied Miss Simmons tartly. “This wasn’t a one-man job. How could it have been? I should be inclined to call it a three-man job. One to switch off the lights, one to snitch the necklace and one to — was that window open all the time? I thought so. And — and one to pick up the necklace when the second fellow threw it out onto the terrace.”

The word shot from Baxter’s lips with explosive force. Miss Simmons looked at him curiously.

“Miss Simmons,” said the efficient one impressively, “everybody was assembled in here waiting for the reading to begin, but the pseudo McTodd was nowhere to be found. I discovered him eventually on the terrace in close talk with the Halliday girl.”

“His partner,” said Miss Simmons, nodding. “We thought so all along. And let me add my little bit. There’s a fellow down in the servants’ hall that calls himself a valet, and I’ll bet he didn’t know what a valet was till he came here. I thought he was a crook the moment I set eyes on him. I can tell ’em in the dark. Now, do you know whose valet he is? This McTodd fellow’s!”

Baxter bounded to and fro like a caged tiger.

“And with my own ears,” he cried excitedly, “I heard the Halliday girl refuse to come to the drawing-room to listen to the reading. She was out on the terrace throughout the whole affair. Miss Simmons, we must act! We must act!”

“Yes, but not like idiots,” replied the detective frostily.

“Well, you can’t charge out — as you looked as if you wanted to just then — and denounce these crooks where they sit. We’ve got to go carefully.”

“But meanwhile they will smuggle the necklace away!”

“They won’t smuggle any necklace away, not while I’m around. Suspicion’s no good. We’ve made out a nice little case against the three of them, but it’s no use unless we catch them with the goods. The first thing we have to do is to find out where they’ve hidden the stuff, and that’ll take patience. I’ll start by searching that girl’s room. Then I’ll search the valet fellow’s room. And if the stuff isn’t there it’ll mean they’ve hidden it out in the open somewhere.”

“But this McTodd fellow — this fellow who poses as McTodd — he may have it all the while.”

“No. I’ll search his room, too, but the stuff won’t be there. He’s the fellow who’s going to get it in the end, because he’s got that place out in the woods to hide it in. But they wouldn’t have had time to slip it to him yet. That necklace is somewhere right here. And if,” said Miss Simmons with grim facetiousness, “they can hide it from me they may keep it as a birthday present.”