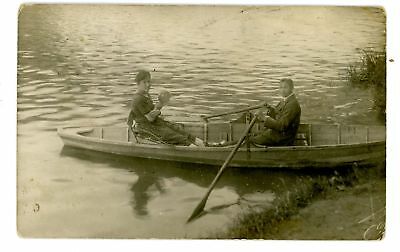 Psmith, for want of conversation, had begun rowing again. The start he gave at these remarkable words caused him to skim the surface of the water with the left oar in such a manner as to send a liberal pint into Eve’s lap. He started forward with apologies.

“Oh, never mind about that!” said Eve impatiently. “It doesn’t matter… Mr. McTodd,” she said, and there was a note of gentleness in her voice, “I do wish you would tell me what the trouble was.”

Psmith stared at the floor of the boat in silence. He was wrestling with a feeling of injury. True, he had not during their brief conversation at the Senior Conservative Club specifically inquired of Mr. McTodd whether he was a bachelor; but somehow he felt that the man should have dropped some hint as to his married state. True, again, Mr. McTodd had not asked him to impersonate him at Blandings Castle. And yet undeniably he felt that he had a grievance. Psmith’s was an orderly mind. He had proposed to continue the pleasant relations which had begun between Eve and himself, seeing to it that every day they became a little pleasanter, until eventually, in due season, they should reach the point where it would become possible to lay heart and hand at her feet. For there was no doubt in his mind that in a world congested to overflowing with girls Eve Halliday stood entirely alone. And now this infernal Cynthia had risen from nowhere to stand between them. Even a young man as liberally endowed with calm assurance as he was might find it awkward to conduct his wooing with such a handicap as a wife in the background.

“I suppose you are thinking that it is no business of mine?”

Psmith came out of his thoughts with a start.

“You see, I’m devoted to Cynthia — and I like you.” She smiled for the first time. Her embarrassment was passing. “That is the whole point,” she said. “I do like you. And I’m quite sure that if you were really the sort of man I thought you when I first heard about all this, I shouldn’t. The friend who told me about you and Cynthia made it seem as if the whole fault had been yours. I got the impression that you had been very unkind to Cynthia. I thought you must be a brute, and when Lord Emsworth told me who you were my first impulse was to hate you. I think if you had come along just then I should have been rather horrid to you. But you were late and that gave me time to think it over. And then I remembered how nice you had been to me and I felt somehow that — that you must really be quite nice, and it occurred to me that there might be some explanation. And I thought that, perhaps, if you would let interfere in your private affairs — and if things hadn’t gone too far — I might do something to help — try to bring you together, you know.”

She broke off, a little confused, for now that the words were out she was conscious of a return of her former shyness. Even though she was an old friend of Cynthia’s there did seem something insufferably officious in this meddling; and when she saw the look of pain on her companion’s face she regretted that she had spoken. Naturally, she thought, he was offended.

In supposing that Psmith was offended she was mistaken. Internally he was glowing with a renewed admiration for all those beautiful qualities in her which he had detected, before they had ever met, at several yards’ range across the street from the window of the Drones Club smoking room. His look of pain was due to the fact that, having now had time to grapple with the problem, he had decided to dispose of this Cynthia once and for all. He proposed to eliminate her forever from his life, and the elimination of even such a comparative stranger seemed to him to call for a pained look. So he assumed one.

“That,” he said gravely, “would, I fear, be impossible. It is like you to suggest it, and I cannot tell you how much I appreciate the kindness which has made you interest yourself in my troubles; but it is too late for any reconciliation. Cynthia and I are divorced.”

For a moment the temptation had come to him to kill the woman off with some wasting sickness, but this he resisted as tending towards possible future complications. He was resolved, however, that there should be no question of bringing them together again.

He was disturbed to find Eve staring at him in amazement.

“Divorced? But how can you be divorced? It’s only a few days since you and she were in London together.”

Psmith ceased to wonder that Mr. McTodd had had trouble with his wife. The woman was a perfect pest.

“I used the term in a spiritual rather than a legal sense,” he replied. “True, there has been no actual decree, but we are separated beyond hope of reunion.” He saw the distress in Eve’s eyes and hurried on. “There are things,” he said, “which it is impossible for a man to overlook, however broad-minded he may be. Love, Miss Halliday, is a delicate plant. It needs tending, nursing, assiduous fostering. This cannot be done by throwing the breakfast bacon at a husband’s head.”

Eve’s astonishment was such that the word came out in a startled squeak.

“In the dish,” said Psmith sadly.

“On more than one occasion. Her temper in the mornings was terrible. I have known her lift the cat over two chairs and a settee with a single kick, and all because there were no mushrooms.”

“It is true,” said Psmith. “Come over to Canada and I will show you the cat.”

“Cynthia did that! Cynthia — why, she was always the gentlest little creature!”

“That,” said Psmith, “would, I suppose, be before she had taken to drink.”

Psmith was feeling happier. A passing thought did come to him that all this was perhaps a trifle rough on the absent Cynthia, but he mastered the unmanly weakness. It was necessary that Cynthia should suffer in the good cause. Already he had begun to detect in Eve’s eyes the faint dawnings of an angelic pity, and pity is recognized by all the best authorities as one of the most valuable emotions which your wooer can awaken.

“We lived in one of the dry provinces of Canada, and, as so often happens, that started the trouble. From the moment when she installed a private still her downfall was swift. I have seen her, under the influence of home-brew, rage through the house like a devastating cyclone…. I hate speaking like this of one who was your friend,” said Psmith in a low, vibrating voice. “I would not tell these things to anyone but you. The world, of course, supposes that the entire blame for the collapse of our home was mine. I took care that it should be so. The opinion of the world matters little to me. But with you it is different. I should not like you to think badly of me, Miss Halliday. I do not make friends easily…. I am a lonely man…. But somehow it has seemed to me since we met that you and I might be friends.”

Eve stretched her hand out impulsively.

Psmith took her hand and held it far longer than was, strictly speaking, necessary.

He turned the nose of the boat to the shore and rowed slowly back.

“I have suffered,” said Psmith gravely as he helped her ashore. “But, if you will be my friend, I think that I may forget.”

They walked in silence up the winding path to the castle.

To Psmith five minutes later, as he sat in his room smoking a cigarette and looking dreamily out at the distant hills, there entered the Hon. Frederick Threepwood, who, having closed the door behind him, tottered to the bed and uttered a deep and discordant groan. Psmith, his mind thus rudely wrenched from pleasant meditations, turned and regarded the gloomy youth with disfavor.

“At any other time, Comrade Threepwood,” he said politely but with firmness, “certainly. But not now. I am not in the vein.”

“What?” said the Honorable Freddie vacantly.

“I say that at any other time I shall be delighted to listen to your farmyard imitations, but not now. At the moment I am deep in thoughts of my own, and I may say frankly that I regard you as more or less of an excrescence. I want solitude, solitude. I am in a beautiful reverie, and your presence jars upon me somewhat profoundly.”

The Honorable Freddie ruined the symmetry of his hair by passing his fingers feverishly through it.

“Don’t talk so much! I never met a fellow like you for talking.”

Having rumpled his hair to the left he went through it again and rumpled it to the right. “I say, do you know what? You’ve jolly well got to clear out of here quick!” He got up from the bed and approached the window. Having done which, he bent towards Psmith and whispered in his ear. “The game’s up!”

Psmith withdrew his ear with a touch of hauteur, but he looked at his companion with a little more interest. He had feared, when he saw Freddie stagger in with such melodramatic despair and emit so hollow a groan, that the topic on which he wished to converse was the already exhausted one of his broken heart. It now began to appear that weightier matters were on his mind.

“I fail to understand you, Comrade Threepwood,” he said. “The last time I had the privilege of conversing with you, you informed me that Susan, or whatever her name is, merely giggled and told you not to be silly when you embraced her. In other words, she is not a detective. What has happened since then to get you all worked up?”