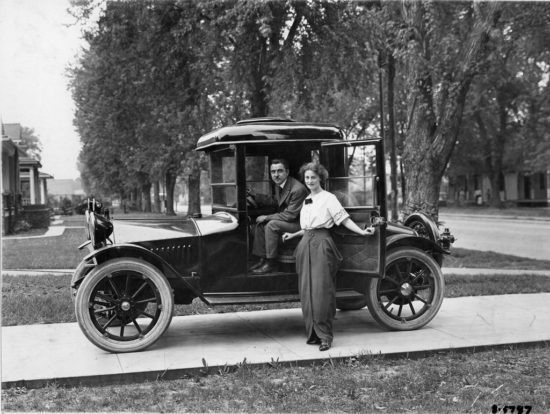 The 12:50 train drew up with a grinding of brakes at the platform of Market Blandings, and Psmith, who had been whiling away the time of waiting by squandering money which he could ill afford on the slot machine which supplied butterscotch, turned and submitted it to a grave scrutiny. Eve Halliday got out of a third-class compartment.

Eve regarded him with frank astonishment.

‘What are you doing here?’ she asked.

‘Lord Emsworth was kind enough to suggest that, as we were such old friends, I should come down in the car and meet you.’

‘Are we old friends?’

‘Surely! Have you forgotten all those happy days in London?’

‘There was only one.’

‘True! But think how many meetings we crammed into it.’

‘Are you staying at the castle?’

‘Yes; and what is more, I am the life and soul of the party. Have you anything in the shape of luggage?’

‘I nearly always take luggage when I am going to stay a month or so in the country. It’s at the back somewhere.’

‘I will look after it. You will find the car outside. If you care to go and sit in it, I will join you in a moment. And lest the time hangs heavy on your hands, take this. Butterscotch. Delicious and, so I understand, wholesome. I bought it specially for you.’

A few minutes later, having arranged for the trunk to be taken to the castle, Psmith emerged from the station and found Eve drinking in the beauties of the town of Market Blandings.

‘What a delightful old place!’ she said as they drove off. ‘I almost wish I lived here.’

‘During the brief period of my stay at the castle,’ said Psmith, ‘the same thought has occurred to me. It is the sort of place where one feels that one could gladly settle down into a peaceful retirement and grow a honey-colored beard.’ He looked at her with solemn admiration. ‘Women are wonderful,’ he said.

‘And why, Mister Bones, are women wonderful?’ asked Eve.

‘I was thinking at the moment of your appearance. You have just stepped off the train after a four-hour journey, and you are as fresh and blooming as — if I may coin a simile — a rose. How do you do it? When I arrived I was deep in alluvial deposits, and have only just managed to scrape them off.’

‘When did you arrive?’

‘On the evening of the day on which I met you.’

‘But it’s so extraordinary! That you should be here, I mean. I was wondering if I should ever see you again.’ Eve colored a little and went on rather hurriedly. ‘I mean, it seems so strange that we should always be meeting like this.’

‘Fate, probably,’ said Psmith. ‘I hope it isn’t going to spoil your visit?’

‘I could have done with a trifle more emphasis on the last word,’ said Psmith gently. ‘Forgive me for criticizing your methods of voice production, but surely you can see how much better it would have sounded, spoken thus, ‘Oh, no!’ ’

He began to see that it was going to be difficult to introduce a eulogy of the Hon. Freddie Threepwood into this conversation.

‘This is my first visit to a place of this size.’

The car had turned in at the big stone gates and they were bowling smoothly up the winding drive. Through an avenue of trees to the right the great bulk of the castle had just appeared, gray and imposing against the sky. The afternoon sun glittered on the lake beyond it.

‘Is everything very stately?’

‘Not at all. We are very homely folk, we of Blandings Castle. We go about, simple and unaffected, dropping gracious words all over the place. Lord Emsworth didn’t overawe you, did he?’

Psmith nodded. If she knew Freddie quite well there was naturally no need to talk about him. He did not talk about him, therefore.

‘I met him for the first time the day I met you.’

‘Good gracious!’ Eve stared. ‘And he invited you to the castle?’

‘Strange, I agree. One can only account for it, can one not, by supposing that I radiate some extraordinary attraction? Have you noticed it?’

‘No?’ said Psmith, surprised. ‘Ah, well,’ he went on tolerantly, ‘no doubt it will flash upon you quite unexpectedly sooner or later. Like a thunderbolt or something.’

‘Not at all,’ said Psmith. ‘Conceited? No, no! Success has not spoiled me.’

‘Have you had any success?’

‘None whatever.’ The car stopped. ‘We get down here,’ said Psmith, opening the door.

‘Because if we go up to the house you will infallibly be pounced on and set to work by one Baxter — a delightful fellow but a whale for toil. I propose to conduct you on a tour round the grounds, and then we will go for a row on the lake. You will enjoy that.’

‘You seem to have mapped out my future for me.’

‘I have,’ said Psmith with emphasis, and in the monocled eye that met hers Eve detected so beaming a glance of esteem and admiration that she retreated warily into herself and endeavored to be frigid.

‘I’m afraid I haven’t time to wander about the grounds,’ she said aloofly. ‘I must be going and seeing Mr. Baxter.’

‘Baxter,’ said Psmith, ‘is not one of the natural beauties of the place. Time enough to see him when you are compelled to. We are now in the southern pleasance or the west home park or something. Note the refined way the deer are cropping the grass.’

‘Leaving the pleasance on our left, we proceed to the northern messuage. The dandelions were imported from Egypt by the ninth earl.’

‘You will enjoy the lake,’ said Psmith. ‘The newts are of the famous old Blandings strain. They were introduced, together with the water beetles, in the reign of Queen Elizabeth. Lord Emsworth, of course, holds manorial rights over the mosquito swatting.’

Eve was a girl of high and haughty spirit, and as such strongly resented being appropriated and having her movements directed by one who, in spite of his specious claims, was almost a stranger. But somehow she found her companion’s placid assumption of authority hard to resist. Almost meekly she accompanied him through meadow and shrubbery, over velvet lawns and past gleaming flower beds, and her indignation evaporated as her eyes absorbed the beauty of it all.

She gave a little sigh. If Market Blandings had seemed a place in which one might dwell happily, Blandings Castle was a paradise.

‘Before us now,’ said Psmith, ‘lies the celebrated yew alley, so called from the yews which hem it in. Speaking in my capacity of guide to the estate, I may say that when we have turned this next corner you will see a most remarkable sight.’

And they did. Before them, as they passed in under the boughs of an aged tree, lay a green vista, faintly dappled with stray shafts of sunshine. In the middle of this vista the Hon. Frederick Threepwood was embracing a young woman in the dress of a housemaid.