For several years now, I’ve argued — here at HILOBROW, as well as in the UNBORED books I’ve co-authored — that the Sixties (1964–1973) were a golden age for YA and YYA adventures. This post is one in a series of 10 identifying my favorites from 1971. 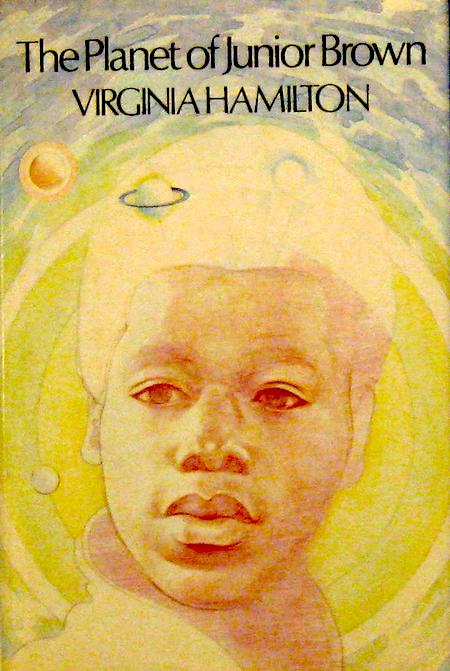 Virginia Hamilton’s YA adventure The Planet of Junior Brown.

What a strange, sad, amazing story! Buddy Clark, a New York City orphan known as “Tomorrow Billy,” takes his fellow eighth-grader, Junior Brown, under his wing. The two boys, both African American, find sanctuary in a secret room in the school’s basement, where the janitor is working on a mechanical model of the solar system. Junior is an overprotected 300-pound musical prodigy with mental health issues; it’s all that Buddy, himself a former math prodigy, can do to prevent him from withdrawing into a fantasy world. Although Junior is the novel’s titular subject, Buddy is the more interesting character. Brave and resourceful, he spends much of his time seeing to the wellbeing of other homeless kids, a few of whom we meet. There is, we discover, an underground network of “planets” — refuges — for such children, each of which is overseen by a “Tomorrow Billy” like Buddy. Although this sounds like an Oliver Twist set-up, these older veterans not only coordinate the complex logistics necessary to care for their charges, but they work to keep them from falling into a life of crime. (It’s almost a science fiction story — about utopian planets where the galaxy’s misfits can thrive; at one point the janitor claims that “the human race is yet to come” and that Buddy and Junior are “forerunners.”) The reader may hope that a kind, competent adult will show up to save the day, but this is (mostly) not the case. Junior’s mother is a sickly neurotic, his music teacher suffers from delusions of grandeur, and the school’s over-zealous vice principal is hot on the boys’ trail….

Fun facts: Winner of a 1972 Newbery Honor, the book was adapted in 1997 by Clement Virgo as a movie starring Martin Villafana as Junior, Rainbow Francks as Buddy, and Margot Kidder as the piano teacher. Hamilton, an African American children’s books author, is perhaps best remembered today for M.C. Higgins, the Great (1974).

Let me know if I’ve missed any adventures from this year that you particularly admire. Also, please check out these additional lists.