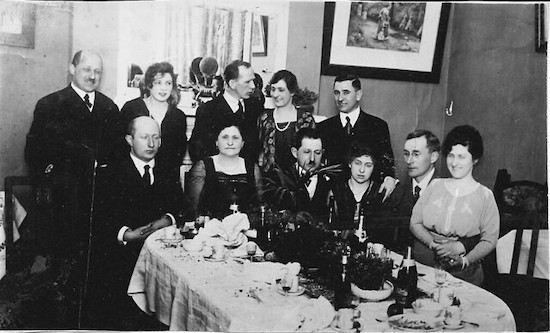 ‘Miss Halliday,’ announced the Efficient Baxter, removing another letter from its envelope and submitting it to a swift, keen scrutiny, ‘arrives at about three today. She is catching the 12:50 train.’

He placed the letter on the pile beside his plate, and having decapitated an egg peered sharply into its interior as if hoping to surprise guilty secrets. For it was the breakfast hour, and the members of the house party, scattered up and down the long table, were fortifying their tissues against another day. An agreeable scent of bacon floated over the scene like a benediction.

Lord Emsworth looked up from the seed catalogue in which he was immersed. For some time past his enjoyment of the meal had been marred by a vague sense of something missing, and now he knew what it was.

‘Coffee!’ he said, not violently but in the voice of a good man oppressed. ‘I want coffee! Why have I no coffee? Constance, my dear, I should have coffee. Why have I none?’

‘I’m sure I gave you some,’ said Lady Constance, brightly presiding over the beverages at the other end of the table.
‘Then where is it?’ demanded his lordship clinchingly.

Baxter — almost regretfully, it seemed — gave the egg a clean bill of health and turned in his able way to cope with this domestic problem.

‘Did I? Did I? Why, so I did! Bless my soul!’ His lordship, relieved, took an invigorating sip. ‘What were you saying just then, my dear fellow?’

‘I have had a letter from Miss Halliday,’ said Baxter. ‘She writes that she is catching the 12:50 train at Paddington, which means that she should arrive at Market Blandings at about three.’

‘Who,’ asked Miss Peavey in a low, thrilling voice, ceasing for a moment to peck at her plate of kedgeree, ‘is Miss Halliday?’

‘The exact question I was about to ask myself,’ said Lord Emsworth. ‘Baxter, my dear fellow, who is Miss Halliday?’

Baxter, with a stifled sigh, was about to refresh his employer’s memory when Psmith anticipated him. Psmith had been consuming toast and marmalade with his customary languid grace, and up till now had firmly checked all attempts to engage him in conversation.

‘Miss Halliday,’ he said, ‘is a very old and valued friend of mine. We two have, so to speak, pulled the gowans fine. I had been hoping to hear that she had been sighted on the horizon.’

The effect of these words on two of the company was somewhat remarkable. Baxter, hearing them, gave such a violent start that he spilled half the contents of his cup; and Freddie, who had been flitting like a butterfly among the dishes on the sideboard, and had just decided to help himself to scrambled eggs, deposited a liberal spoonful on the carpet, where it was found and salvaged a moment later by Lady Constance’s spaniel.

Psmith did not observe these phenomena, for he had returned to his toast and marmalade. He thus missed encountering perhaps the keenest glance that had ever come through Rupert Baxter’s spectacles. It was not a protracted glance, but while it lasted it was like the ray from an oxy-acetylene blowpipe.

‘A friend of yours?’ said Lord Emsworth. ‘Indeed? Of course, Baxter, I remember now. Miss Halliday is the young lady who is coming to catalogue the library.’

‘What a delightful task!’ cooed Miss Peavey. ‘To live among the stored-up thoughts of dead and gone genius!’

‘You had better go down and meet her, my dear fellow,’ said Lord Emsworth. ‘At the station, you know,’ he continued, clarifying his meaning. ‘She will be glad to see you.’

‘I was about to suggest it myself,’ said Psmith.

‘Though why the library needs cataloguing,’ said his lordship, returning to a problem which still vexed his soul when he had leisure to give a thought to it, ‘I can’t — however — — ’

He finished his coffee and rose from the table. A stray shaft of sunlight had fallen provocatively on his bald head, and sunshine always made him restive.

‘Are you going to your flowers, Lord Emsworth?’ asked Miss Peavey.

‘I will accompany you, if I may,’ said Psmith.

‘I have always held,’ said Psmith, ‘that there is no finer tonic than a good look at a lobelia immediately after breakfast. Doctors, I believe, recommend it.’

‘Oh, I say,’ said Freddie hastily as he reached the door, ‘can I have a couple of words with you a bit later on?’

‘A thousand if you wish it,’ said Psmith. ‘You will find me somewhere out there in the great open spaces where men are men.’

He included the entire company in a benevolent smile, and left the room.

‘How charming he is!’ sighed Miss Peavey. ‘Don’t you think so, Mr. Baxter?’

The Efficient Baxter seemed for a moment to find some difficulty in replying.

‘And such a soul! It shines on that wonderful brow of his, doesn’t it?’

‘He has a good forehead,’ said Lady Constance. ‘But I wish he wouldn’t wear his hair so short. Somehow it makes him seem unlike a poet.’

‘Well, really, Freddie,’ said Lady Constance, piqued, ‘I think we hardly need you to tell us that.’

‘No, no, of course. But what I mean is, in spite of his wearing his hair short, you know.’

‘I ventured to speak to him of that yesterday,’ said Miss Peavey, ‘and he said he rather expected to be wearing it even shorter very soon.’

‘Freddie!’ cried Lady Constance with asperity. ‘What are you doing?’

A brown lake of tea was filling the portion of the tablecloth immediately opposite the Hon. Frederick Threepwood. Like the Efficient Baxter a few minutes before, sudden emotion had caused him to upset his cup.