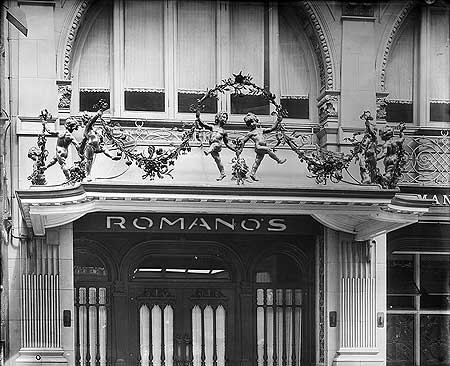 Said the person after a request for a match: “Warm night, but there’s a change in the weather coming on, or I’m greatly mistaken. I’ve lost nearly everything in the chops and changes of life, but there’s one thing I haven’t lost — my barometer — that’s to say my rheumatism. It tells me when rain is coming as sure as an aneroid. London is pretty full for the time of year, don’t you think?”

They talked, the gentleman with the barometer passing from the weather to politics, from politics to high finance, from high finance to himself. He had been a solicitor.

“Disbarred, as you see, for nothing, but what a hundred men are doing at the present moment. There’s no justice in the world, except maybe in the Law Courts. I’m not one of those who think the Law is an ass, no, there’s a great deal of common sense in the Law of England. I’m not talking of the Incorporated Law Society that shut me out from a living, for a slip any man might make. I’m talking of the old Laws of England as administered by his Majesty’s Judges; study them, and you will be astonished at their straight common-sense and justice. I’m not holding any brief for lawyers — I’m frank, you see — the business of lawyers is to wriggle round and circumvent the truth, to muddy evidence, confuse witnesses and undo justice. I’m just talking of the laws.”

“Do you know anything of the laws of lunacy?” asked Jones.

“I had a friend who was supposed to be suffering from mind trouble, two doctors doped him and put him away in an asylum — he was quite harmless.”

“What do you mean by doped him?” asked the other.

“Gave him a drug to quiet him, and then took him off in an automobile.”

“Was there money involved?”

“You may say there was. He was worth a million.”

“Anyone to benefit by his being put away?”

“Well, I expect one might make out a case of that; the family would have the handling of the million, wouldn’t they?”

“It all depends — but there’s one thing certain, there’d be a thundering law case for any clever solicitor to handle if the plaintiff were not too far gone in his mind to plead. Anyhow, the drugging is out of order — whole thing sounds fishy.”

“Suppose he escaped,” said Jones. “Could they take him back by force?”

“That’s a difficult question to answer. If he were cutting up shines it would be easy, but if he were clever enough to pretend to be sane it might be difficult. You see, he would have to be arrested, no man can go up and seize another man in the street and say: You’re mad, come along with me, simply because, even if he holds a certificate of lunacy against the other man the other man might say you’ve made a mistake, I’m not the person you want. Then it would be a question of swearing before a magistrate. The good old Laws of England are very strict about the freedom of the body, and the rights of the individual man to be heard in his own defence. If your lunatic were not too insane, and were to take refuge in a friend’s house, and the friend were to back him, that would make things more difficult still.”

“If he were to take refuge in his own house?”

“Oh, that would make the thing still more difficult, very much more so. If, of course, he were not conducting himself in a manner detrimental to the public peace, firing guns out of windows and so forth. The laws of England are very strict about entering a man’s house. Of course, were the pursuers to go before a magistrate and swear that the pursued were a dangerous lunatic, then a right of search and entry might be obtained, but on the pursuers would lie the onus of proof. Now pauper lunatics are very easily dealt with: the Relieving Officer, on the strength of a certificate of lunacy, can go to the poor man’s cottage or tenement, and take him away, for, you see, the man possessing no property it is supposed that no man is interested in his internment, but once introduce the property element and there is the very devil to pay, especially in cases where the lunatic is only eccentric and does not come into court with straws in his hair, so to speak.”

“I get you,” said Jones. He offered cigarettes, and presently the communicative one departed, having borrowed fourpence on the strength of his professional advice.

The rest of that night was a very good imitation of a nightmare. Jones tried several different seats in succession, and managed to do a good deal of walking. Dawn found him on London Bridge, watching the birth of another perfect day, but without enthusiasm.

He was cheerful but tired. The thought that at nine o’clock or thereabouts, he would be able to place his hands on eight thousand pounds, gave him the material for his cheerfulness. He had often read of the joy of open air life, and the freedom of the hobo; but open air life in London, on looking back upon it, did not appeal to him. He had been twice moved on by policemen, and his next door neighbours, after the departure of the barometer man, were of a type that inspired neither liking nor trust.

He heard Big Ben booming six o’clock. He had three hours still before him, and he determined to take it out in walking. He would go citywards, and then come back with an appetite for breakfast.

As he walked he made plans. When he had drawn his money he would breakfast at a restaurant, he fixed upon Romanos’, eggs and bacon and sausages, coffee and hot rolls would be the menu. Then he fell to wondering whether Romanos’ would be open for breakfast, or whether it was of the type of restaurant that only serves luncheons and dinners. If it were, then he could breakfast at the Charing Cross Hotel.

These considerations led him a good distance on his way. Then the Mile End Road beguiled him, lying straight and foreign looking, and empty in the sunlight. The Barometer man’s weather apparatus must have been at fault, for in all the sky there was not a cloud, nor the symptom of the coming of a cloud.

Away down near the docks, a clock over a public house pointed to half past seven, and he judged it time to return.

He came back. The Mile End Road was still deserted, the city round the bank was destitute of life, Fleet Street empty.

Pompeii lay not more utterly dead than this weird city of vast business palaces, and the Strand shewed nothing of life or almost nothing, every shop was shuttered though now it was close upon nine o’clock.

Something had happened to London, some blight had fallen on the inhabitants, death seemed everywhere, not seen but hinted at. Stray recollections of weird stories by H. G. Wells passed through the mind of Jones. He recalled the city of London when the Martians had done with it, that city of death, and horror, and sunlight and silence.

Then of a sudden, as he neared the Law Courts, the appalling truth suddenly suggested itself to him.