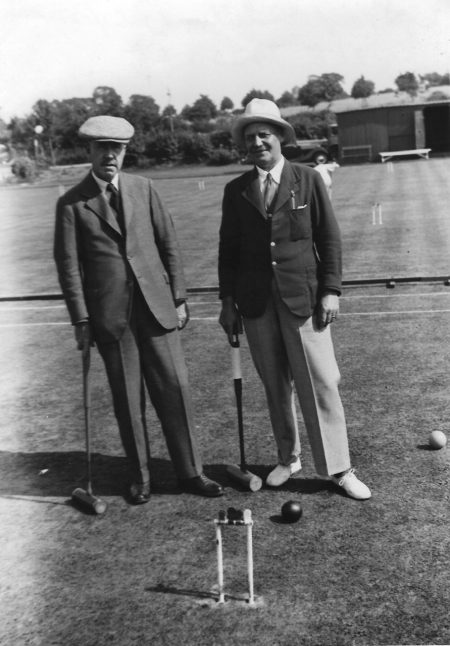 Hoover, leading the way downstairs, shewed Jones the billiard-room on the first floor, the dining-room, the smoke-room. All pleasant places, with windows opening on the gardens. Then he introduced him to some gentlemen. To Colonel Hawker, just come in from an after breakfast game of croquet, to Major Barstowe, and to a young man with no chin to speak of, named Smithers. There were several others, very quiet people, the three mentioned are enough for consideration.

Colonel Hawker and Major Barstowe were having an argument in the smoking-room when Hoover and Jones entered.

“I did not say I did not believe you,” said Barstowe, “I said it was strange.”

“Strange,” cried the Colonel, “what do you mean by strange — it’s not the word I object to, it’s the tone you spoke in.”

“Why,” said Barstowe, “the Colonel was telling me he had seen pigs in Burmah sixteen feet long, and sunflowers twenty feet in diameter.”

“Oh, that story,” said Hoover; “yes, there’s nothing strange in that.”

“I’ll knock any man down that doubts my word,” said the Colonel, “that’s flat.”

Then the disputants went out to play another game of croquet, and Jones, picking up with Smithers, played a game of billiards, Hoover going off and leaving them alone.

After playing for about five minutes, Smithers, who had maintained an uncanny silence, broke off the game.

“Let’s play something better than this,” said he. “Did you know I was rich?”

They sat on the divan and played pitch and toss. At the end of ten minutes, Jones had won twenty pounds.

“I think I will stop now,” said Smithers. “Give me back that sovereign I lent you to toss with.”

“But you owe me twenty pounds,” said Jones.

“I’ll pay you that to-morrow,” said Smithers; “these sovereigns are not to be spent, they are only for playing with.”

“Oh, that doesn’t matter,” said Jones, handing back the coin, and recognising that, penniless as he was, here was a small fund to be drawn upon by cunning, should he find a means of escape. “I’m rich. I’m worth ten millions.”

“But you mustn’t tell Hoover.”

“When will you lend me them?”

“When I get my bag of sovereigns from London. They are coming down soon.”

“Rather, come out in the garden.”

The tennis and croquet lawns lay at the back of the house, brick walls, covered in part with fruit trees, surrounded the whole place. The wall on the left of the house struck Jones as being practicable, and he noticed that none of the walls were spiked or glassed. Hoover’s patients were evidently not of the dangerous and agile type.

“What’s at the other side of this wall?” asked Jones, as they passed along by the left hand barrier. Smithers giggled.

“Girls! what sort of girls?”

“Little ones with long hair and bigger ones; they learn their lessons there, it’s a school. The gardener left his ladder there one day and I climbed up. There were a lot of girls there. I nodded to them, and they all came to the wall. I made them all laugh. I asked them to come over the wall and toss for sovereigns — then a lady came and told me to go away. She didn’t seem to like me.”

Jones, all during luncheon — the meal was served in his own apartments — revolved things in his mind, Smithers amongst others. Smithers’ mania for handling gold had evidently been satisfied by giving him these few coins to play with. They were real ones, Jones had satisfied himself of that. Smithers, despite his want of chin, was evidently not a person to be put off with counterfeit coin. Jones had come down from London dressed just as he had called at Curzon Street. That is to say in a black morning coat and grey trousers. His tall hat had evidently been forgotten by his deporters. After luncheon he asked for a cap to wear in the garden, and was supplied with a grey tweed shooting cap of Hoover’s.

With this on his head he took his seat in an arbour, an arbour which, he noticed, had its opening facing the house.

Here, smoking, he continued revolving his plans, and here afternoon tea was served to him.

Ten minutes later the colonel and the major began another game of croquet, and five minutes after that, came from the house Smithers, with a butterfly net in his hand.

“The sovereigns have come,” said Jones.

“The bag of sovereigns?”

“Yes, with a big red seal from the bankers. I’m going to give you fifty.”

“Oh, Lord,” said Smithers, “but you haven’t said anything to Hoover?”

“Not a word — but you must do something for me before I give you them.”

“I want you to go up to Colonel Hawker and take him aside.”

“And tell him that Major Barstowe says he’s a liar.”

“I’ll stand by the wall here, and if any of the girls look over, as they probably will, for I’m going to whistle to them, I’ll make them come over and toss for sovereigns.”

“That would be a lark,” said the unfortunate.

“All my sovereigns are upstairs in the bag — I know — lend me yours whilst I’m waiting.”

“Why, I’m going to give you fifty — and I only ask you to lend me five for a moment in case those girls —”

Smithers put his hand in his pocket and produced the coins; they were in a little chamois leather bag. “Don’t open the bag,” said he, “just shake it and they’ll know there are sovereigns in it by the noise.”

Jones was under no delusion. He reckoned that the garden was always under surveillance, and that a man getting over a wall would have little chance of reaching the street, unless he managed to distract the attention of watchers. He thought it probable that his conversation with Smithers had been watched, and possibly the handing over of some article noted.

There was a seat just here, close to the wall. He sat down on it, pulled his cap over his eyes, and stretched out his legs. Then under the peak of the cap, he watched Smithers approaching Colonel Hawker, interrupt him just as he was on the point of making a stroke, and lead him aside.

The effect on the colonel’s mind of the interruption to his stroke, followed by the sudden information that his veracity had been impeached, was miraculous and sudden as the slap on the side of the face that sent the butterfly hunter flying. The attack on Barstowe, who seemed to fight well, the cries, the shouts, the imprecations, the fact that half a dozen people, inmates and attendants, joined in the confusion as if by magic, all this was nothing to Jones, nor was the subsidiary fact that one of the inmates, a quiet mannered clergyman, with a taste for arson, had taken advantage of the confusion and was patiently and sedulously at work, firing the thatch of the summer house in six different places, with a long concealed box of matches.

Jones, on the stroke of the Colonel, had risen from the seat, and with the aid of a wall-trained plum tree, had reached the top of the wall and dropped on the other side into a bed of mignonette. It was a hockey day at the school, and there were no girls in the garden. He ran across it to the open front gate and reached the road, ran down the road, which was deserted, and burning in the late afternoon sunshine, reached a side road and slackened his pace. All the roads were of the same pattern, broad, respectable, and lined with detached and semi-detached houses set in gardens, and labelled according to the owner’s fancy. Old Anglo-Indian colonels and majors lived here, and one knew their houses by such names as “Lucknow,” “Cawnpore,” etc., just as one knows azaleas by their blossoms. Jones, like an animal making for cover, pushed on till he reached a street of shops. A long, long street, running north and south with the shop fronts on the eastern side, sun-blinded and sunlit. A peep of blue and perfect sea shewed at the end of the street, and on the sea the white sail of a boat. Sandbourne-on-Sea is a pleasant place to stay at, but Jones did not want to stay there.

London was his objective. London and the National Provincial Bank, but of the direction or the distance to be travelled, he knew no more than the man in the moon.