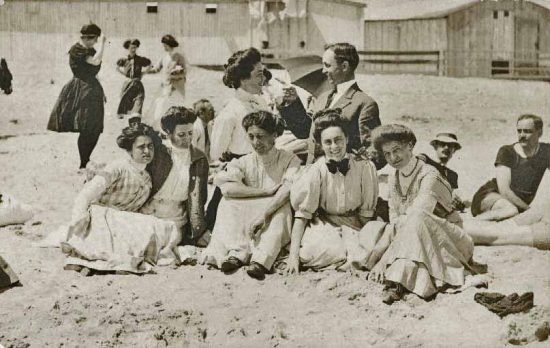 CHAPTER XXIV: HE RUNS TO EARTH

As the fox seeks an earth, he was seeking for a hole to hide in. Across the road a narrow house, set between a fishmonger’s shop and a sea-side library, displayed in one of its lower windows a card with the word “Apartments.” Jones crossed the road to this house and knocked at the hall door. He waited a minute and a half, ninety seconds, and every second a framed vision of Hoover in pursuit, Hoover and his assistants streaming like hounds on a hot scent. Then he found a decrepit bell and pulled it.

Almost on the pull the door opened, disclosing a bustless, sharp-eyed and cheerful-looking little woman of fifty or so, wearing a cameo brooch and cornelian rings. She wore other things but you did not notice them.

“Have you rooms to let?” asked Jones.

“Well, sir, I have the front parlour unoccupied,” replied the landlady, “and two bed-rooms on the top floor. Are there any children?”

“No,” said Jones. “I came down here alone for a holiday. May I see the rooms?”

She took him to the top front bed-room first. It was clean and tidy, just like herself, and gave a cheery view of the shop fronts on the opposite side of the street.

Jones, looking out of the window, saw something that held him for a moment fascinated and forgetful of his surroundings and his companion. Hoover, no less, walking hurriedly and accompanied by a man who looked like a gardener. They were passing towards the sea, looking about them as they went. Hoover had the appearance of a person who has lost a purse or some article of value, so Jones thought as he watched them vanish. He turned to the landlady.

“I like this room,” said he, “it is cheerful and quiet, just the sort of place I want. Now let’s see the parlour.”

The parlour boasted of a horsehair sofa, chairs to match, pictures to match, and a glass fronted bookcase containing volumes of the Sunday Companion, Sword and Trowel, Home Influence, and Ouida’s “Moths” in the old, yellow-back, two shilling edition.

“Very nice indeed,” said Jones. “What do you charge?”

“Well, sir,” said the landlady — her name was Henshaw — “it’s a pound a week for the two rooms without board, two pounds with.”

“Any extras?” asked the artful Jones.

“Well, that will do me nicely. I came along here right from the station, and my portmanteau hasn’t arrived, though it was labelled for here, and the porter told me he had put it on the train. I’ll have to go up to the station this evening again to see if it has arrived. Meanwhile, seeing I haven’t my luggage with me, I’ll pay you in advance.”

She assured him that this was unnecessary, but he insisted.

When she had accepted the money she asked him what he would have for supper, or would he prefer late dinner.

Then he found himself alone. He sat down on the horsehair sofa to think. Would Hoover circularise his description and offer a reward? No, that was highly improbable. Hoover’s was a high class establishment, he would avoid publicity as much as possible, but he would be pretty sure to use the intelligence, such as it was, of the police, telling them to act with caution.

Would he make inquiries at all the lodging-houses? That was a doubtful point. Jones tried to fancy himself in Hoover’s position and failed.

One thing certainly Hoover would do. Have all the exits from Sandbourne-on-Sea watched. That was the logical thing to do, and Hoover was a logical man.

There was nothing to do but give the hunt time to cool off, and at this thought the prospect of days of lurking in this room of right angles and horsehair-covered furniture, rose up before him like a black billow. Then came the almost comforting thought, he could not lurk without creating suspicion on the part of Mrs. Henshaw. He would have to get out, somehow. The weather was glorious, and the strip of seaweed hanging by the mantelpiece dry as tinder. A sea-side visitor who sat all day in his room in the face of such weather, would create a most unhealthy interest in the mind of any sea-side landlady. No, whatever else he might do he could not lurk.

The most terrible things in dramatic situations are the little things that speak to one for once in their lives. The pattern of the carpet that tells you that there is no doubt of the fact that your wife has run away with all your money, and left you with seven children to look after, the form of the chair that tells you that Justice with a noose in her hand is waiting on the front door step. Jones, just now, was under the obsession of the picture of the room, whose place was above the mantelpiece.

It was an oleograph of a gentleman in uniform, probably the Prince Consort, correct, sane, urbane — a terrible comparison for a man in an insane situation, for insanity is not confined to the brain of man or its productions — though heaven knows she has a fine field of movement in both.

A thundering rat-tat-tat at the hall door brought Jones to his feet. He heard the door answered, a voice outside saying “N’k you” and the door shut. It was some parcel left in. Then he heard Mrs. Henshaw descending the kitchen stairs and all was quiet. He turned to the bookcase, opened it, inspected the contents, and chose Moths.