Between 1966 and 1970, Jim Steranko drew seven complete Marvel comic books — four issues of Nick Fury, Agent of S.H.I.E.L.D. and three of Captain America — and stories in 22 other issues. Comics artists have been drawing tributes to his work ever since. Steranko is particularly known for his cover art, but this series spotlights other artists’ homages to his interior page design.

Steve Rude and Mike Royer’s splash page for 2003’s Captain America: What Price Glory? #4, written by Bruce Jones, synthesizes elements from two of Steranko’s own homages to Salvador Dali: an interior page from 1969’s Captain America #111 and the cover of 1968’s Nick Fury, Agent of S.H.I.E.L.D. #7. The Captain America figure is very much in the mode of the character’s co-creator (and one of Steranko’s biggest influences), Jack Kirby, with whom Royer had often worked. 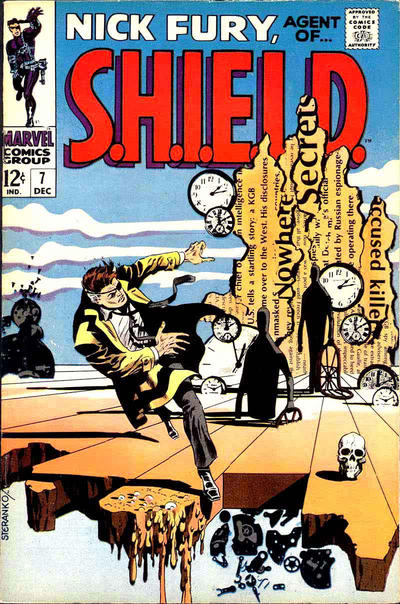