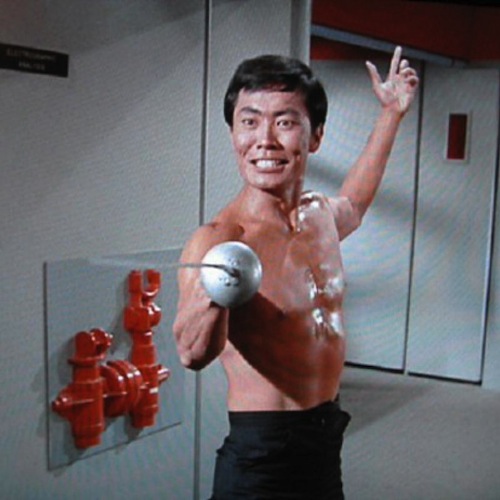 GEORGE TAKEI (born 1937) helped plan the subways of Los Angeles as a public servant in the 1970s, so they promoted him to navigator of the galaxy. He’d started as a child internee during World War II; though that made him a witness to America’s shame, he became a prophet of its promise. Leonard Nimoy may have been Star Trek’s breakout star, but Takei turned out to be its dimension-breaching citizen, bringing a large share of the future into the real world. Trek paid Takei a backhanded compliment, displacing the Asian stereotypes of emotional remoteness and questionable loyalty onto Spock, while Sulu, though an umpteenth wheel like most of the cast, got to be the kind of athletic, quick-witted sex symbol that a less racist era might have made into another James Bond. But from Star Trek and Heroes to stage musicals and Stern, Takei’s career got a longer future than most of his crewmates. Despite the infamous reluctance on the part of the producer of the Next Generation Trek series, there were gays on the Enterprise all along — which the whole planet learned when Takei broke “out” into being his real self, no longer trapped by barbed wire or social condemnation. Now on worldwide media that’s as utopian as it gets, Takei is an indispensible commentator, public conscience, and much-needed comedian, helping fast-forward his fellow citizens’ 21st century into that most unimaginable of futures, an America that looks like the one he believes in.

On his or her birthday, HiLobrow irregularly pays tribute to one of our high-, low-, no-, or hilobrow heroes. Also born this date: Alvin Weinberg, Hylo Brown, Harold Lloyd.