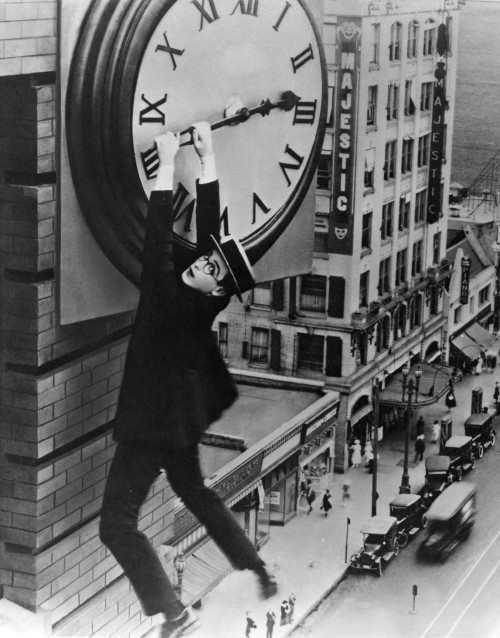 In many of his films, silent clown HAROLD LLOYD (1893–1971) wears an artificial hand. His real one was partially blown off by a bomb on which he’d lit a cigarette. The backfiring stunt, which also threatened to leave him blind, happened during a promotional photoshoot in which a real bomb was somehow mistaken for a prop. I love these Lloyd facts, partly because they’re gruesome but mainly because they highlight the peril often involved in his stunts, and the vanity and sensitivity that drove them. Though he made several talkies (including The Milky Way, nicely remade as The Kid from Brooklyn with Danny Kaye on its tenth anniversary), Lloyd stands with Buster Keaton and Charlie Chaplin as immortal loa of silent comedy but apart as the one who performed those death-defying stunts. His iconic hanging-from-a-clock sequence from Safety Last! (1923) has been subject to endless parody and homage, most notably and affectionately by Jackie Chan in Project A, in which Chan loses his grip on the minute hand to plummet sixty feet through two canopies.

There are many things to love about Lloyd’s films — the acrobatics, the perfect timing, the satire of American go-getter culture — but a detail I can’t help but delight in is that his protagonist is almost always called “Harold Lloyd”, pre-dating Larry David, Stewart Lee, and Paul Auster in ventriloquising through a shifted self. And he did it all with a missing finger and thumb. 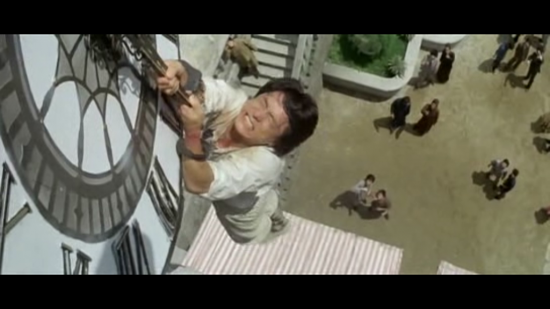 On his or her birthday, HiLobrow irregularly pays tribute to one of our high-, low-, no-, or hilobrow heroes. Also born this date: Alvin Weinberg, Hylo Brown, George Takei.