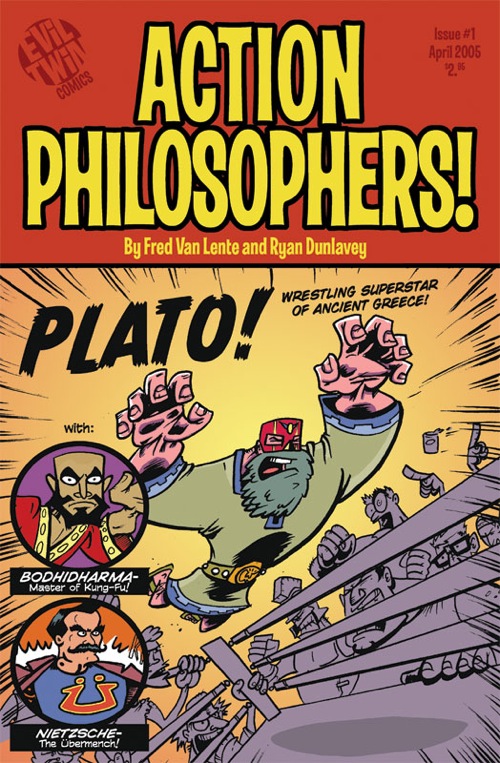 My most distinctive image of comicbook scripter FRED VAN LENTE (born 1972) is connected to the most commonplace of comic-con and autograph-line occurrences, the “how do you break into the industry” moment. I’ll never forget the exceptional patience and thoughtfulness with which Fred addressed one version of this big question while trying to drift away from a long-ago comic-shop signing; though an aspirant myself (whose first self-published comic bears a back-cover blurb by the soon-famous Fred), it never occurred to me that I could have “his career,” since I spent the first two or three years of it pinching myself that he had his career. Van Lente is the heir to misfit masters of the form like Steve Gerber who struggled for every iconoclastic, literary word in the commercial age of comics, now triumphant as even the “Big Two” publishers (Marvel and DC) feel their pop-art roots and close the ironic distance with an audience that has Big Bang Theory beamed in several nights a week. Like most successes in a renegade artform, Van Lente “broke in” through a sidewall no one was tending, with a homemade laser and detailed stress-point calculations he carried in his head. Part of a poet-dweeb generation who revitalize comics by having read something else, his self-published Action Philosophers (with artist/co-creator Ryan Dunlavey) was an unexpected scholastic blockbuster that got the attention of precipitously less small publishers from Moonstone to Image to Platinum to Marvel, who signed him up to give mythic weight to their most cultish oddities (a Swiftian She-Hulk) and fringe personality to the most familiar franchises (a psychoactive Spider-Man). Van Lente sees right through the garish properties of big entertainment — to what makes them relevant and eternal.

On his or her birthday, HiLobrow irregularly pays tribute to one of our high-, low-, no-, or hilobrow heroes. Also born this date: Jack Benny and Max Horkheimer.

READ MORE about members of the Reconstructionist Generation (1964-73).