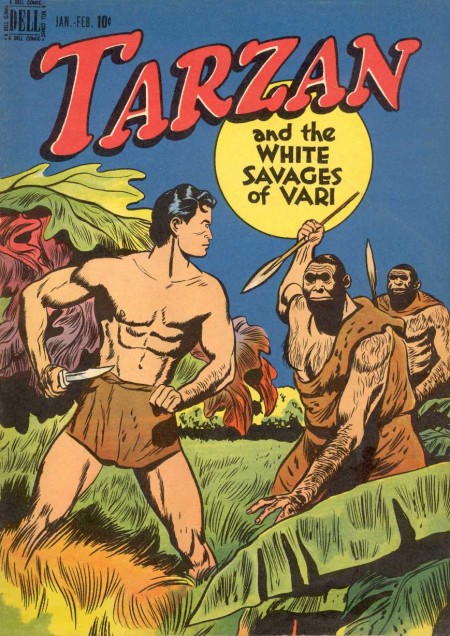 In the early days of comic books, as opposed to newspaper strips, the prolific JESSE MARSH (1907–66) was one of the few cartoonists with a truly distinctive style. The thousands of pages he drew — for westerns like Gene Autry, sci-fi adventures like John Carter of Mars, and most notably Tarzan — are masterfully built of woodcut-like brushed ink lines, repeating forms, and spare composition. Marsh is best known for drawing 150+ issues of Whitman/Western/Dell’s Tarzan comic, from 1947 through 1965, during which time he conducted thorough research into African flora and fauna, and — for Tarzan’s “lost world” adventures — prehistoric flora and fauna too. As a result his Tarzan comics were set in a very convincing world. But they’re admired by other cartoonists so much because of Marsh’s style, which is split somewhere between fine art woodcuts and a reduction of Milton Caniff’s cinematically derived brushwork. Marsh’s panels convey violent action… yet they remain as cool and still as a bas relief. Whether they are near or far, his dinosaurs loom in forced perspective. His beautiful panel compositions have some influence from Japanese ukiyoe woodcut — in dark emphatic areas of subject with areas of empty relief, in the landscape that they inhabit. And his humans are always very much a part of humanity. So was Marsh, who lived his entire life with his parents, in Monrovia, Calif., and cared for them in their infirm years. He died not long after quitting Tarzan.

On his or her birthday, HiLobrow irregularly pays tribute to one of our high-, low-, no-, or hilobrow heroes. Also born this date: Pina Bausch, Joseph Mitchell, Gary Gygax.