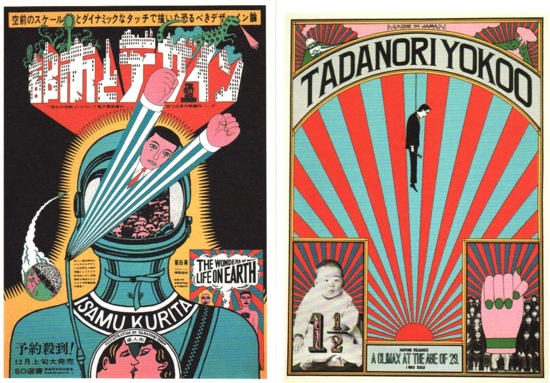 I have heard it said that in Japan in the Sixties, TADANORI YOKOO (born 1936) was the graphic equivalent of the Beatles; I think that’s true. Reacting, participating, anticipating, and innovating on the stylistic, spiritual, and musical issues of the 1960s-80s, Yokoo helped redefine the psyche of post-war Japan. His vital and hysterical, yet serenely stoic posters and artworks — which drew on Pop Art, traced photos, hippie imagery, shocking misuses of the formatting devices and graphic conventions of Ukiyo-e master woodcut prints, and not least the spirit and inspiration of his friends Yukio Mishima, Yayio Kusama, and Yoko Ono — have influenced album covers, and poster and magazine design ever since. (When I moved to Los Angeles in 1976 and began to take my portfolio around, every art director had a fat Yokoo monograph on their bookshelf.) Like Andy Warhol, Yokoo was an advertising guy who repurposed marketing media to idea media… but I think the only western artist from whom Yokoo might have borrowed anything was John Wesley, whose subtle, emblematic, outlined paintings share some formal poster-like elements and some eccentric postural elements. (I am the only person in the world to notice that.) Yokoo, who at the ripe old age of 29 announced on a broadside poster [above, right] that he was retired/dead, has continued to evolve and has produced thousands of vibrating, complex, smiling, spiritual graphic visions and inventions. His psychedelic vision has never faltered.

On his or her birthday, HiLobrow irregularly pays tribute to one of our high-, low-, no-, or hilobrow heroes. Also born this date: Emma Goldman and George Walker.

READ MORE about members of the Anti-Anti-Utopian (1934-43) generation.