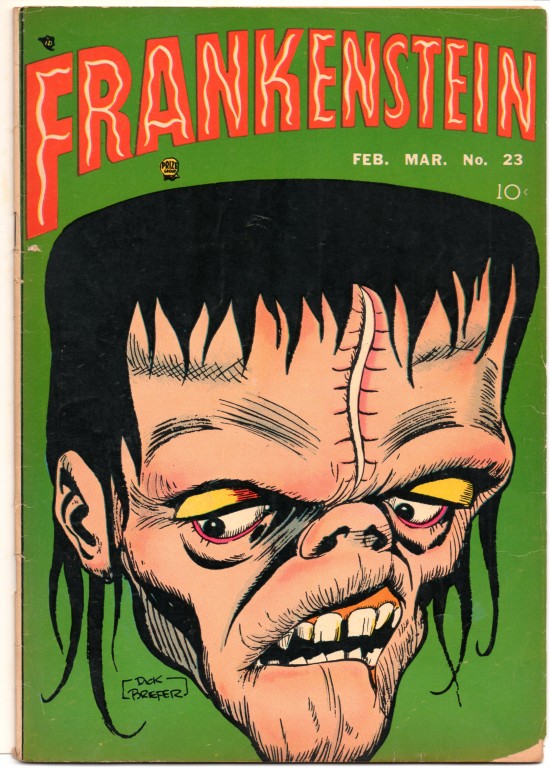 To old nerds who care about this stuff, the Los Angeles-based comics writer-artist DICK BRIEFER (1915–80) is an important figure for having created a peculiarly interesting comic — about the Frankenstein monster — during a period when the vast majority of comics were lame. Working under pseudonyms, Briefer got his start in the field before comic books as we know them existed; for example, he contributed to Wow, What A Magazine!, a tabloid-sized collection of newspaper comics reprints that filled in the gaps with original work. His pioneering horror comic “New Adventures of Frankenstein” was introduced in the December 1940 issue of Prize Comics. Briefer’s version of Shelley’s monster features familiar Karloff elements: high brow, heavy-lidded tortured eyes with dark circles under them, bolts in the neck, stitches aplenty… except Briefer’s creature has a nose that is tiny and placed right between his eyes. Wow! This detail emphasizes that the monster is a conglomeration of stolen body parts that don’t belong together, yet somehow the whole thing works. Briefer’s writing was the same way — because, under the pressure of primitive market research, from episode to episode he was required to be serious, then comical, then scary. His technique is a bravura one: loose, confident, goofy, vertiginous.

On his or her birthday, HiLobrow irregularly pays tribute to one of our high-, low-, no-, or hilobrow heroes. Also born this date: Karel Capek and Scott Walker.