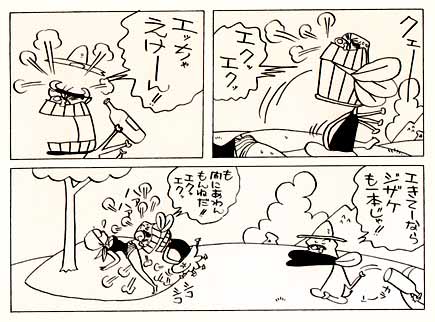 Please try to visualize a drawn Japanese landscape, reduced in the extreme graphically, yet still manifesting the play of mountains, sun, streams, lonely clouds, single trees on vast curving plains, isolated blades of grass where buzz single crickets — a minimal, linear, world with expanses of white — significant empty areas in the manner of traditional Japanese woodcuts. Introduce into this black and white pastoral, the already mentioned cricket, a little fish, an eel, a beautiful girl, a horse, a farmer, indentured farm hands, a bulldog with black muzzle and teeth, an occasional turtle, office workers, a few samurai warriors, the artist himself in beret and, lastly, a giant brooding ox smoking a pipe. Further imagine that everyone, but the girl, in this world sprouts big square teeth when they’re angry, and oil-gusher nose-bleeds when horny (a phenomenon, which he named hana-ji bu, that’s now a common device); the males’ balls are hanging out of their pants, a target for the eels, crickets, fish (well, everybody, really) to kick, bite, slit, or dice. Would you believe it’s a mainstream comic strip admired and enjoyed for decades by kids of all ages? No? Try telling that to Japanese gag manga creator YASUJI TANIOKA (1942-99), who from the late 1960s on, created a world in which everyone is victim and aggressor, everything works to universal disadvantage and sexual frustration, and the sound effects are the size of walk-in freezers.

BELOW: The first 10 minutes of Meta Metta Gakido Koza, a movie based on a TV show based on a Yasuji Tanioka manga.

On his or her birthday, HiLobrow irregularly pays tribute to one of our high-, low-, no-, or hilobrow heroes. Also born this date: Preston Sturges.