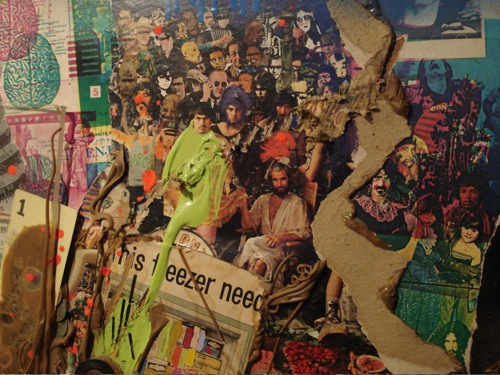 Album cover design artist CAL SCHENKEL (born 1947) provided the perfect graphic equivalent to Frank Zappa and The Mothers of Invention’s music. A graphic artist as well as a composer and iconoclast, Zappa didn’t ignore the importance of packaging when it came to his subversive conceptual music. Luckily for teenage America in the Sixties, the two met and enjoyed decades of creative collaboration (or elaboration, in cases where Frank dictated the material). Zappa album covers like We’re Only in It for the Money (1968; it parodied the psychedelic fad, and The Beatles’ Sgt. Pepper’s in particular), Cruising with Ruben & the Jets (1968), Uncle Meat (1969), and so forth, are masterpieces of graphic provocation and subversion. Gleefully co-mingling tropes of fine art (from Gainsborough to Jasper Johns and De Kooning) with Carl Barks’ Donald Duck comics and pulp magazine illustrations, Schenkel’s work was a one-man branch of hippie art — as innovative and exciting as the San Francisco poster art, Zap comics, and light shows of the era. His wonderful color and compositional sense looks casual and may be relaxed, but it’s not unrigorous — instead, call it meticulous looseness.

On his or her birthday, HiLobrow irregularly pays tribute to one of our high-, low-, no-, or hilobrow heroes. Also born this date: Elmore James.