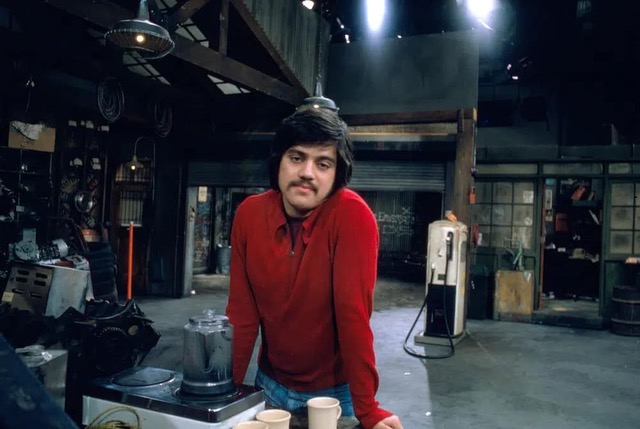 Like most kids in the 1970s I spent a lot of time in front of a TV. A LOT. And there was a lot to watch — it was a Golden Age for television, and even by today’s standards TV was pretty diverse. Except for Latinx representation. Besides Charo, who my father whistled at, my mother bristled at, and who made me cringe (like, why is she so stoopid?), the only person I saw on TV who resembled anyone in my family was Freddie Prinze.

Freddie was from Washington Heights, where my grandmother (and at times I) lived in the 1960s. He was a stand-up comedian with a talent for reinventing himself: He spun his half-Puerto Rican, half-German parentage into Puerto Rican-Hungarian—for the comic effect of calling himself a “Hungarican” and changed his last name from Pruetzel to Prinze — so he would be the “Prince of Comedy.” I could have seen him on the Tonight Show, but I don’t remember. What I do remember is Francisco “Chico” Rodriguez.

Chico and the Man ran on NBC’s Channel 4 from September 1974 to July 1978, roughly coinciding with my high school years. “Chico” was a young Mexican-American working at “The Man’s” (Jack Albertson’s) garage in East L.A., California. Wikipedia will tell you it was the first U.S. television series set in a Mexican-American neighborhood and the character was Mexican, but I knew Chico was really Puerto Rican because I heard an older family member once say they knew his abuela (grandmother).

That was all I needed to hear to put my already overactive imagination on overdrive. When I was a kid my abuela knew every other abuela on 157th Street and we visited among apartments on many occasions, so in my mind both Freddie and my abuelas lived on the same floor, went to the same Iglesia Pentecostal, and sometimes ate arroz con pollo or pastelón at the same table. I wanted it to be true, because in the 1970s there weren’t a lot of people on TV that looked like they could have been in my family. Plus, I thought he was cute. And that was my second fantasy: that one day I’d be visiting my grandmother and see him in the hall, and he would think I was cute. Hey, he was “only” six years older than me. But it was not to be. In January 1977 Prinze committed suicide. He was 22.

Sixteen-year-olds back then didn’t know much about things like depression. There just wasn’t the awareness of mental health like there is today. So, I couldn’t believe he did that. Why? He had everything — everything! Or so I thought.

The show stumbled on another season or so, but I didn’t watch it. Why bother, the “Prince” had left the building. But he did leave behind a namesake son and a legacy that gave one redheaded Puerto Rican girl living in a top-floor tenement walkup in the Bronx the germination of an idea. It was possible for someone like me to get out.

See All Posts by Michele Carlo

Michele Carlo is a native New Yorker, a Nuyorican, a natural redhead, and remembers when a slice of pizza (and the NYC subway) cost 75 cents. As a storyteller, she has performed across the U.S., including Joe’s Pub, RISK! live shows and podcast, and the MOTH’s Mainstage in NYC; and has appeared on NPR (Latino USA) and PBS (Latino Americans of NY & NJ, Stories from the Stage). She is also the author of the NYC-set memoir Fish Out of Agua: My life on neither side of the (subway) tracks. For more on Michele, click to her site here, and to listen to her podcast (“Showcasing the ‘stories behind the stories’ of artists we love...where those who were last are now first!”), tune in here.