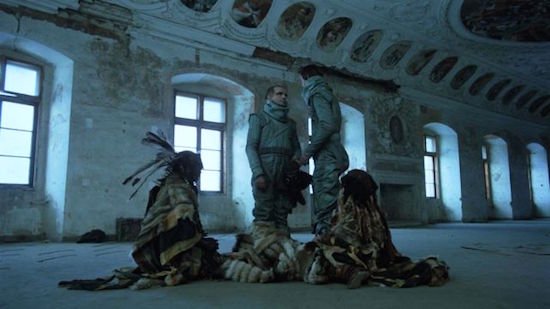 There’s a new digital restoration of On the Silver Globe out in a handful of theaters this summer. I caught it at Cinefamily over the weekend. Now, this is the third newsletter in six months I’ve written about Andrzej Żuławski. I love his movies. While it’s bewitching in many ways, this would be a less than ideal introduction to his movies. Start with Possession. Or even Cosmos. On the Silver Globe, despite its gorgeous camerawork and costumes, might be just about unwatchable to someone who isn’t already intrigued by Żuławski’s work.

I loved On the Silver Globe but at times I was frustrated by it, and it didn’t help that I was craning my neck left and right to read the subtitles between the heads of people in the crowded theater in front of me. I have never seen sets and costumes like these. Beach space goth with the unworldly flourish of an Alexander McQueen collection. There’s movement and atmosphere that is genuinely unsettling. And yet, I was left craving something — either a developed character or anything more of a plot — to pin this mood down and make these scenes memorable. That’s partly because On the Silver Globe is forever incomplete, and it is watched in its almost-there state like Judy Garland’s A Star is Born.

Mubi has a detailed history of the censorship and other hoops the filmmaker went through to finish the film. The production was shut down at right about the end of filming in 1977. Poland’s Deputy Minister of Culture “repeatedly denied all requests to shoot the final few scenes and even ordered the dismantling of all sets, costumes, and props (which crew members kept tucked away in their own apartments). Żuławski, now completely disillusioned, moved back to France. When the Communist Party began to lose influence in Poland in 1987, Żuławski quickly restarted the project and edited the surviving materials for entry to the 1988 Cannes Film Festival” 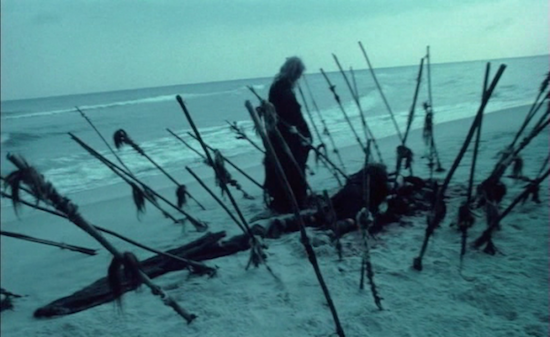 In a handful of places, Żuławski narrates the scenes he was unable to film over footage of contemporary urban Poland. Zach Lewis at Mubi says, “To my mind, this is the most powerful use of breaking the fourth wall in cinema history, asking each viewer to live both in and out of the film, national history, and production history.” But I’m not so sure. It is almost three hours long and the missing scenes were infrequent — maybe 15 minutes in total. He’s taking us outside the picture — but there is still a picture. I couldn’t quite make sense of who the characters were or what they were doing and, at the end of the film, I felt like I needed to watch it again because I was so confused. Maybe I will? It sure is beautiful, blue, and gloomy.