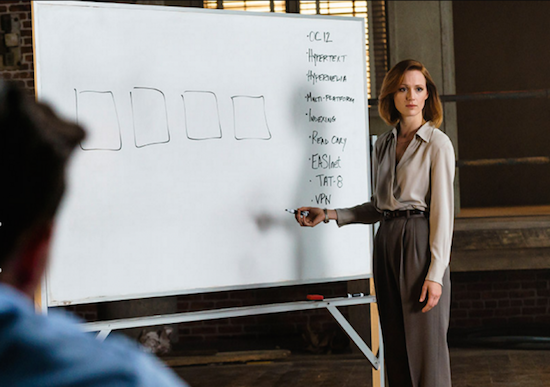 Well, that was a terrific season finale of Halt and Catch Fire last night. Jason Kottke wrote a very moving response on how the show stirs up feelings of nostalgia and lament for someone who remembers when the internet offered only the promise of what’s possible.

I’ve loved the show since the beginning, but I tend to recommend it with the caveat that sometimes it gets too on the nose with tech references (“people are arguing on the message board. they call it… a flamewar.”) But that little hiccup was beautifully smoothed over in the season three finale. In the scene Kottke mentions, the characters explained the relationship between the internet and the world wide web — to an audience that might not know they aren’t synonyms — in a way that was subtle, educational, and dramatic. And in another scene they did the same in a conversation about open source.

I’m struck by the complexity of how each character’s ambition is expressed. I have met these people both in the art and tech worlds. Their drive manifests not always as a crusade for power, or money, but the desperate desire to see an idea realized. I hope that in this next season, the final season, there’s a bit more class analysis (and much-needed race analysis.) There was some room for that with the recurring character Tom, who grew up poor, with a single mother, and rejected working without a paycheck when there was an episode that kind of lionized doing so. But the show had no real exposition on income inequality and the Californian Ideology, when it moved the setting from Dallas to San Francisco this season. Much as I liked the character Joe as a classic manipulative tech rockstar, a common and unfortunate type I’ve never seen represented anywhere with such accuracy, it makes for better television that he has grown more sympathetic over time. Likewise, the character of Donna, who, from the start was a bit too idealized as a perfect mom who can perfectly code, is much more sympathetic now that she’s given room to make mistakes and be more flawed. My recommendation for someone interested but bored easily: Watch the first episode, then the final two of each season. And for this season, watch the first, then the final three episodes. 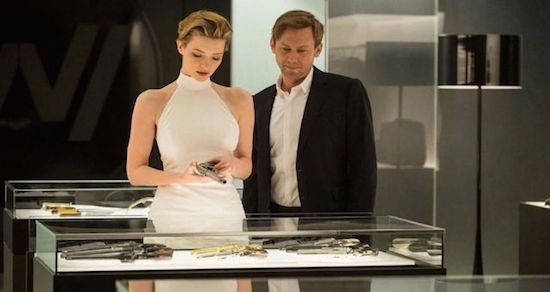 My intention is to only recommend new things, each week, but I’m circling back to a previous subject. Which might be appropriate in this case, since Westworld is playing with a kind of Blue’s Clues comforting repetition in each episode. I really loved the two episodes I’ve seen — and I’m impressed that someone is finally telling an android story in 2016 in a fresh and exciting way. It has so much promise. I hope they take advantage of the premise and don’t shy away from conversations about politics, income inequality, and race. (For example, what does it mean that in the United States, when American Indians are 2% of the population, a company can manufacture people that look like an under-indexed demographic and then use them as entertainment set pieces?) In particular, the structure of the series, with the same day played over and over, offers a spin on atemporality I just haven’t seen before. There is no real way to register what time it is outside the amusement park (and this has already sparked the fascinating fan theory that a younger earnest character might grow up to be the black hat baddie played by Ed Harris in other parts.)

This was a particularly wonderful episode since Thandie Newton has the range. And who knew Evan Rachel Wood has the range too? If you asked me a month ago, I’d probably say I never want to see another fembot again, but that’s Ex Machina‘s fault. I have no patience for AI stories that coast on deep thoughts (but what-does-it-really-mean-to-be-human…) After all, even Blade Runner did more — it had the persistent aching melancholy from the set design to the soundtrack, and that was in juxtaposition with the Philip K. Dick story as its skeleton (I keep meaning to write about how PKD stories never capture his weird humor, but at best, like Blade Runner, they offer something else to supplement the absence of it.) The alienated experience of interacting with AI is now a familiar one because just about everyone has Siri (or Cortana or whatever) on their phone. So we have first-hand experience with how it may be less awkward to speak to AI than a living human who gets stressed out and has to work for a living. But that illusion of seamlessness disguises the fact that a human being programmed and designed this technology, and it operates with human limitations and biases — not to mention glitch and error. I want to see more science fiction that recognizes this is a common, familiar experience, not exceptional — and, so far, Westworld is bringing it.