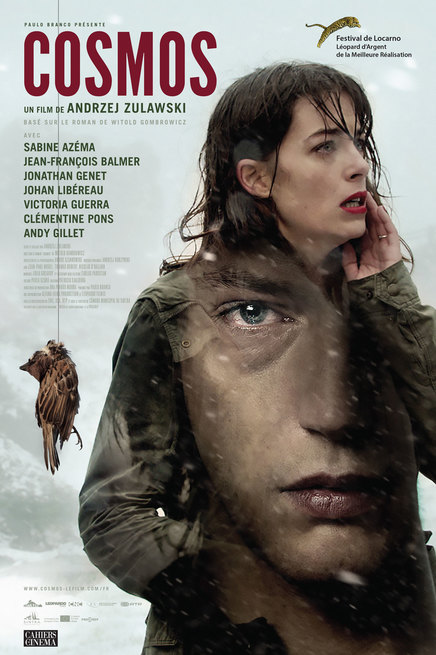 More than a decade ago, I messaged a few dozen people on Friendster with Possession listed among their favorite films in their profiles. I had just watched the film. And I was startled by its emotion, force, and humor and had to talk about it with someone. I found myself wishing I could do that now with Cosmos after seeing it last night. I also found myself wishing I spoke French because the film is funny. Hysterically funny. And in the theater, I experienced a lag between reading the joke in subtitles and waiting for the peculiar acts and enunciations of the actors to punch the humor up.

I wrote a little about the filmmaker Andrzej Zulawski several newsletters back. Cosmos was his first film in fifteen years and unfortunately, as he passed away last year, it will be his last. The film deals with language in a way I’m still parsing. It’s a Witold Gombrowicz adaptation. There’s wordplay and absurdity and the dialogue is rhythmic. There is a Guy in Your MFA-type character writing preposterously purple sentences while (in his mind) in competition with Stendhal and Sartre. Much of it reminded me of the playful taunting and upside-down way of speaking in Who’s Afraid of Virginia Woolf? or avant-guade cinema that admittedly I haven’t seen in a while like Buñuel. Sabine Azéma, playing one of the main characters, is Alain Resnais’ widow. And now I’m tempted to take the day off to watch his films and Alain Robbe-Grillet’s too.

The actor Jonathan Genet has an intense witchy look just like Isabelle Adjani, and while there is nothing like the Possession subway scene here, he is driven to the brink of madness in this performance. Zulawski discovered Genet in a “provincial theater, not even in Paris.” That interview with Mubi is great, by the way. There he talks about The Stranger as the best sci-fi story (Alien is second best) and explains: “A film is not a novel. A novel is not written to be a film. It wasn’t an act of betrayal. The only difference that matters to me than all these circumstances is that Gombrowicz didn’t like people. Even he hated them, except young guys at the port of Buenos Aires. Me, I don’t hate people at all. When you read Cosmos, you see how ugly and stupid are Mister and Madam Woytis, how heavy and uninteresting is Lena, how terrible is Witold’s roommate, always complaining about something. I can’t do that.”

Meanwhile, I’m still thinking about science fiction set in New York. More on this soon and thanks to everyone who has sent in suggestions. I forgot about The Fifth Element! Another one that came to my mind is Conceiving Ada by Lynn Hershman Leeson that I love because it is also — maybe? — the only feature film that captured mid-’90s New York’s New Media scene.