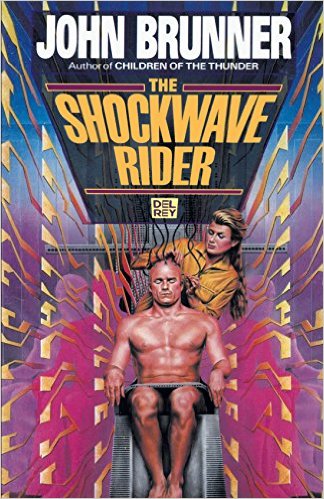 I’d known about John Brunner for a while but I didn’t realize The Shockwave Rider (1975) would be so good. I’m glad I didn’t, because I particularly enjoyed reading it after the Panama Papers and Manning and Snowden leaks. It is a wild book, full of the granular details about life in Brunner’s imagined world — including stray observations about people and cultural habits that made me think of everything from Blue Apron to Wikipedia to mass leaks of classified data.

It’s good. It’s holding the book with my left hand, stirring the pot with my right hand good. I was glued to this story, sneaking in a few pages in the queue at the supermarket, on a pilates reformer before my class began. And then I didn’t want it to end. Nowadays it is rare for me to find a book I can’t put down. Part of this — womp womp — is growing older. I have already read so much. So even if I like something, it’s never quite like the first time I read, say, A Scanner Darkly.

What’s delightful about reading cyberpunk — and this novel, written in 1975, is proto-cyberpunk, if anything — is the delightful nearly-there aspect of the language and descriptions of internet-like things. In The Shockwave Rider, there’s a “data-net”; worms (indeed, Brunner coined worm, although the concept of a computer virus had been around for a couple of years); and identity swapping — but without language like avatar, let alone profile or social network. Here’s an example of that nearly-there language: “The nation was tightly webbed in a net of interlocking data-channels, and a time-traveler from a century ago would have been horrified by the degree to which confidential information had been rendered accessible to total strangers capable of adding two plus two.”

The Shockwave Rider was written about the time of the OPEC crisis. Brunner appears to have read a bit on cybernetics, Project Cybersyn, Rand Corp’s Delphi Method, and phone phreaking. He has said the biggest inspiration was Alvin Toffler’s Future Shock (I tried to read that many, many years ago and found it chock-full of novelty rather than insight or a lens on the futuristic aspirations in the ’70s, but I might try again with it, given how much I loved The Shockwave Rider.) There’s some swingin’ 70s sexuality happening — and I guess we can blame Mike Nichols for normalizing the idea of dating a woman and then her daughter, which is more than a little bit creepy(!). Nevertheless, the women in the book are all smart, most work as engineers of some sort, and there are also a number of African American characters. It was hard not to imagine someone Snowden-ish as the protagonist since his dialogue is typically an unsentimental flourish on liberty and transparency over government corruption.

What I really loved about this story was that the bigger-picture plot, about whistle-blowing and surveillance, was balanced with a subplot about how connectivity can create a sanctuary. There is a beautiful bit about a service called Hearing Aid, in which people can call a number and anonymously confess to someone who only listens and cannot judge, responding simply, “Only I heard that, I hope it helped.” Brunner understood, even in 1975, that something like the internet would be used for personal and emotional reasons.

Jo Walton wrote a wonderful piece on this book for Tor. She’s fairly critical — calling it, a book “I admire more than I like” — and appreciating its little details and uncanny prescience. I agree with her that the protagonist is a jerk, but that Hearing Aid is one of the best things I’ve ever read that captures what I love about the internet. Now I’ve ordered the rest of Brunner’s novels, which I’ll save for a day that I need a book I can’t put down.