I started this week playing “Willow’s Song” from The Wicker Man over and over, until I knew all of its earthy ensorcelling lyrics (“…by stroke as gentle as a feather / I’ll catch a rainbow from the sky.”)

It is one of the most peculiar moments in any film because it feels so naturally suited in the narrative rather than contrived. I believe in this character, wild and strange as she is. I believe she would indeed strip and break into song in just this way, even though it’s a preposterous, unnecessary thing to do. The song didn’t have to be catchy and it didn’t have to be good. That it is both seems entirely by accident. The songwriter Paul Giovanni once said, “The idea for the song was completely original with me — there was no indication of what it was to be in the script except a couple of lines of absolute filth.”

I’ve been thinking about this question in an interview with Leslye Headland about how “‘indie’ describes genre as opposed to means of production.” And how something similar happens in the realm of “weird” books, movies, music. There’s “weird” material that is unsettling for the matter-of-fact way it presents stories and circumstances that are uncanny or grotesque. Then there is the material that feels like the director is winking at the audience. I don’t necessarily mean like Tarantino or Ben Wheatley. (Although I watched Kill List too, this week, and while I loved the editing, with frantic sequences playing without chronology, I was exhausted by the film’s straining, positioning to be a cult classic rather than a film that given time and audience feedback will be filed away in that bucket in due course.) 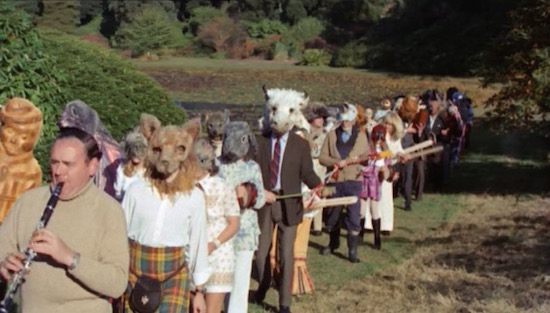 There are several covers of “Willow’s Song” (“How Do”) like this by Isobel Campbell, the Sneaker Pimps, and Doves, but it’s the hollow, off quality of Rachel Verney’s vocals (dubbing for Britt Ekland) against the drumming, banging, and, umm, the spanking that elevates the song to so much more. I thought there might have been a Current 93 version, but searching a bit, I can only recover this version from Nature and Organisation, a band I’m unfamiliar with, but apparently a David Tibet collaborator. Now I realize I am just a few steps from writing out of my depth. I think I’ve mentioned in previous newsletters that I don’t follow music very closely and wouldn’t know where to begin to write any music criticism. This is particularly vexing when it comes to music that I like and cannot find critical writing that I can read on it. I like Current 93, I don’t have an encyclopedic knowledge of all their albums to argue why, and I wouldn’t have the words for it anyway.

But in the absence of the capacity to explain why, I’ll leave you with these songs from Trembling Bells, a Scottish folk group that somehow sounds like it recorded fifty years ago without meanwhile sounding too derivative: