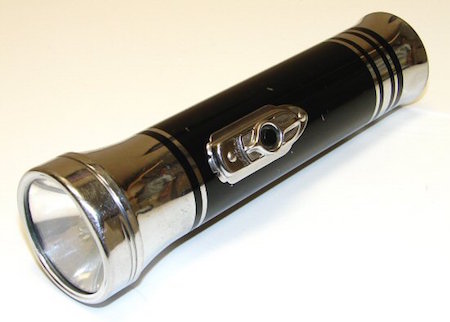 I have no say
over who or what turns me on,
only the power to make things clear as day,

or, at least, as a truculent dawn.
Once a girl brought me to a rave;
I was dizzy, then giddy, then woke up near
dead on a lawn.

When I look back to my origins, I crave
that chastity, that darkness, but not yet.
I also scare skunks off and represent ways
to look brave.

I can render the same silhouette
gargantuan or gaunt,
or shake and make it dance a minuet;

it’s you who choose what I appear to flaunt.
When all the people around me are fully
aware
of whatever’s in front

of their faces, where all their
acquaintances are
and how to find loose change they think
they lost,
I sleep in my drawer;

I prove I am worth the $1.50 I cost
when the power goes out, and at parties
with nothing else
that can distract a preschool guest

or coax shy grownups from their shells.
I might be the first thing a kid ever put
together.
I do just what my battery compels.

Unlike my big brother
the limelight and my cousin the campfire,
I prefer inconsequence:
though famous in culverts and attics,
I would rather

play no role in public events.
I have never — can never — run wild.
Obtuse, hollow-bodied, confined to the
present tense,

I’ll be your lightsaber if you are a child,
though first and last I do no harm.
In bad dreams I see miles

of lignite on fire; in my best I keep
somebody warm.
Sunlight to me is just something I get shut
off in.
Having resigned myself to my fixed form,

I was surprised to escape the cardboard
coffin
of the charity shop that sold me.
Though none of my parts can soften,

the humid summer air can still corrode me.
Pick me up; test me every so often.
Hold me.