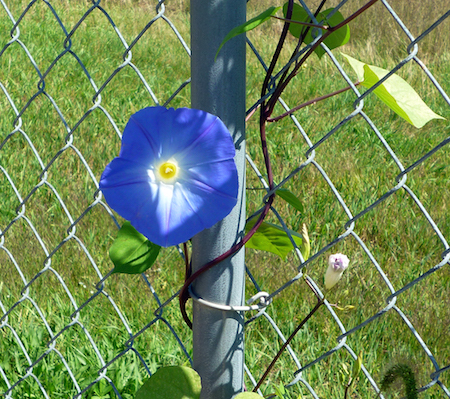 I wake in the dark. My face is a stunned
Cathode ray tube, a pomegranate
Unharmed. If I were a girl, I would be a girl.
I hate my career, I want to go home
To Avonlea. I am a tortoise shell,
A bell on an alarm clock, a Les Paul.
There are rarely men in my dreams.

The fear in your eyes is no less real
For having bounded up from Ariel
Than the disappointed stars on the movie
channel.
If I were only a girl, I could give you a hand.

Each afternoon the off-white trumpet-
flowers
I just miss touching on my way home from
work
Crumple like pillowcases, like antique
gloves.
It must be the dew that lifts them
Before first light: clarinet, English horn,
Querulous soprano saxophone.
They are the hills in “Sheep in Fog,”
Tight-lipped in their straight lines.

There are rarely men in my dreams.
One time I became the famous skyscraper
Whose windows littered Boston during
storms,
A sparkling skirt spiraling through updrafts.

I wake in the dark. The battle of frogs and
mice
Continues under my floorboards.
Somebody from Reuters is there with a big
flashlight
And a microphone on her collar. Can’t you
leave?
Can you take me with you to Avalon?
Can you make a prediction for 1995?
If I were a girl, I could follow you, I say.
The woman from Reuters motions me to
hush.
A decisive skirmish is taking place.
The bullfrogs are winning.
All the mice are wearing my pink
nightgown.

Reprinted from POPULAR MUSIC (1999) by Stephen Burt with the permission of the author and the Center for Literary Publishing at Colorado State University.