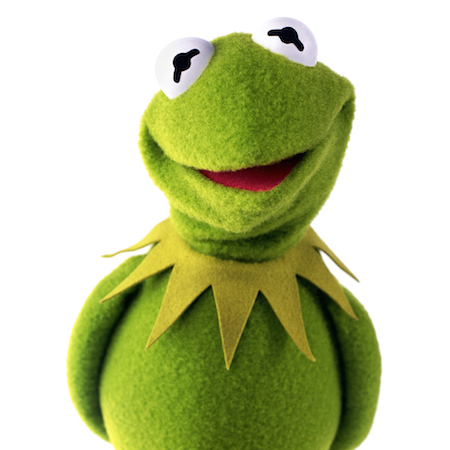 Beleaguered
administrators
everywhere, I am one of you.
I came from a swamp too.
It was hard to get out, even harder to be
young and green
and try to please children, but hardest of all
to learn

how to run the whole show: I nevertheless
remain
supposedly in sole charge
of a dance marathon, a masochistic
acrobat, a pig addicted to lipstick
who holds black belts in several
martial arts,
a talking shag rug eight feet tall, a bear
who tries and tries and fails to entertain,

a pantomime horse whose parts
refuse to leave their Day-Glo yard,
a rock band, and a Pepto-Bismol colored
pair
of cows from Mars who only know
one song,
Mahna mahna, whatever that means.
I need a rest.
I sigh, I sag, I shrug in my canvas chair
and perk up again to chat with tonight’s
special guest,
who asks me why my eyes bug out.
Go figure.

I used to sit on a wall
all day and read the news. Now we go on
in ten, and I am happy to tell
you what almost anyone
who seems to be running things
will say once you catch us backstage:
somebody bigger
than we can ever get is pulling the strings.

Copyright © 2013 by Stephen Burt. Reprinted from BELMONT with the permission of the author and Graywolf Press, Minneapolis, Minnesota.